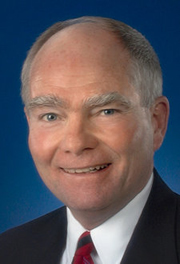 Former Indiana Gov. Joe Kernan will return to his alma mater as an adjunct professor in the Department of Political Science at the University of Notre Dame.

Starting in January, Kernan will teach a one-credit course each year titled “The Executive Branch and Public Policy,” which will explore such issues as state and local budgets, welfare, economic development, health care, capital punishment, urban development and crime. In addition, Kernan will offer special presentations on politics and public service and will serve as a resource for students interested in pursuing internships, graduate study or careers in public policy.

“As a Notre Dame graduate, Joe remains deeply committed to the University and its ideals,” said John Roos, acting chair of political science. “His life exemplifies many of those ideals, and being in class with him will be a great opportunity for our students.”

A 1968 graduate with a bachelor’s degree in government, Kernan was elected in 1996 as lieutenant governor to Gov. Frank O’Bannon. They were re-elected in 2000. After O’Bannon’s death in September 2003, Kernan served as governor until January of this year.

After graduation from Notre Dame, Kernan entered the U. S. Navy and served as a naval flight officer aboard the U.S.S. Kitty Hawk. He was shot down while on a reconnaissance mission over Vietnam in 1972 and was held for 11 months as a prisoner of war. Kernan was repatriated in 1973 and continued on active duty in the Navy until 1974. For his service, Kernan received several awards including two Purple Hearts, the Navy Commendation Medal and the Distinguished Flying Cross.

Kernan was elected mayor of South Bend in 1987 and served for nine years,longer than any mayor in the city’s history. During that time, he and Notre Dame’s former president, Rev. Edward Malloy, C.S.C., developed several cooperative projects, including South Bend’s nationally recognized Center for the Homeless, the National Youth Sports Program, and Christmas in April (now Rebuilding Together) – an annual housing rehabilitation effort mobilizing thousands of volunteers from Notre Dame and the community.

As lieutenant governor, Kernan served as president of the state Senate, director of the Department of Commerce and commissioner of agriculture. As governor, he appointed Katherine L. Davis as lieutenant governor — the first woman to serve in that capacity. He also directed a bi-partisan coalition that passed a crucial tax reform and budget package.

For his many contributions to the community, state and University, he received an honorary doctor of laws degree and served as the principal speaker at Notre Dame’s 153rd Commencement exercises in 1998.

Originally published by Susan Guibert at newsinfo.nd.edu on November 15, 2005.