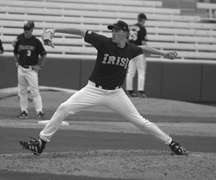 If you want to keep track of Notre Dame senior Tom Thornton’s career, you might want to subscribe to both the Journal of Anthropology and The Sporting News.

Thornton, a 6-foot-6-inch left-handed pitcher, expects to be drafted into professional baseball in June as his college season winds down. Saying good-bye will be difficult for Irish head coach Paul Mainieri, who calls Thornton “the classic thinking-man’s pitcher and a true student of the game.”

A summer’s play with a minor league team would follow. But as the minor league season ends for the senior from the South Boston area (Middleboro, Mass.), Thornton is hoping to give his pitching arm a rest for the fall.

If all goes well, he will hang up his cleats and glove and head to Africa, where an internship at the National Museum of Kenya awaits. There he will feed his passion for the story of early fire users.

“I’ve always been intrigued by the possibility of fire use at its early stage,” says Thornton, who is finishing a double major in anthropology and film, television, and theatre. “The addition of fire into the culture — the only thing that would top it in importance and the ability to change the culture was language.”

Where fire use began is controversial, with some believing it occurred in China and others seeing the logic of Africa, near Kenya. Use of fire is among changes that occurred during a period of rapid development that eventually saw humans migrating across the earth.

Thornton has resisted the elimination of outside endeavors that typically accompanies the transition from collegiate to pro sports, and he has done so with a persistence and resilience that Notre Dame anthropologist Agustin Fuentes says he will not soon forget.

“He really wants to try both,” said Fuentes, who admires Thornton’s tenacity in pursuing his goal.

It was Fuentes who suggested that Thornton consider study in Kenya, says Thornton.

“Getting access to the best materials in Kenya … It’s almost impossible,” said Fuentes, who watched as Thornton pursued the internship by making numerous contacts both in the United States and Kenya.

While at the National Museum of Kenya, he will be assisting anthropologist Purity Kiura. As a recent graduate, his research will rely less on doing original and self-directed fieldwork and more on identifying the status of current inquiry and where it can be expanded. His internship will be supported by a Notre Dame Undergraduate Research Opportunity Program grant.

Thornton cut his teeth on fieldwork and professor-student collaboration last summer while in Colorado on a prestigious internship with the Smithsonian Institute’s National Museum of Natural History. Based in a mountain cabin and working at elevations up to 10,000 feet, Thornton was assigned to a pair of Paleo-Indian archeologists surveying land recently acquired by the National Park system, searching for signs of the area’s first people.

“It was a wonderful opportunity for me,” Thornton said.

The senior also has brought a scholarly quality to his baseball leadership, says Mainieri.

“In addition to having numerous talks with our pitching coach on the philosophy of pitching, Tom also will observe how the other coaches on our staff coach the hitters and the defensive players,” Mainieri said. “He will talk to his teammates about different aspects of the game, gaining further insight into what makes different types of hitters tick or how the defense is working best behind him.”

It is unusual for a pitcher, who does not play daily, to be elected a team captain, but Thornton was. Mainieri sees it as the team’s tribute to Thornton’s leadership ability and tremendous dedication. Those attributes, plus his academic, service and athletic achievements, earned Thornton two major Notre Dame student-athlete awards – the Byron V. Kanaley Award, the most prestigious honor presented to Irish athletes for outstanding leadership on and off the field, and the Christopher Zorich Award, for volunteer service to the university and the South Bend community.

As the semester ended, Thornton was completing an application for an NCAA post-graduate scholarship, which can be deferred for up to five years. While he concedes he cannot attend graduate school while playing professional baseball, he adds: “Hopefully, within the next five years, I’ll be able to.”

Originally published by Gail Hinchion Mancini at newsinfo.nd.edu on May 16, 2006.