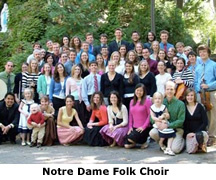 The University of Notre Dame Folk Choir will perform its 13th annual Concert for the Holy Cross Missions titled “The Faces of Mary” at 9p.m. Saturday (Nov. 18) in the Basilica of the Sacred Heart on campus. The event is free and open to the public.

The concert is performed each year to support the international missionary work of the priests and brothers of the Congregation of Holy Cross, Notre Dame’s founding religious order. An offering for this purpose will be taken during the concert with this year’s donations to benefit new schools being built in Bangladesh.

The Notre Dame Folk Choir , formed in 1980 and directed by Steven C. Warner, associate director of Campus Ministry, provides music for the Basilica’s 11:45 a.m. Sunday Mass during the academic year. The choir, which includes some 55 male and female singers, woodwinds, strings and percussion instruments, has toured in Ireland and England and performed for Pope John Paul II.