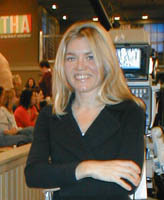 In the fall of her first year at Notre Dame, Stephanie Fitzhugh ‘91 sat nervously at her desk in an O’Shaughnessy Hall classroom, awaiting the start of her Composition and Literature class. Fitzhugh, who always excelled in math and science, felt uneasy taking a course focused on subjects that usually gave her trouble: literature and writing.

“I looked up, and this old man shuffled in,” she recalls. “He was hunched over, with a corduroy jacket on, and a thick beard.”

The professor’s name was Alven Neiman, and she never forgot what she learned from him. In fact, she says, that class changed her view of the liberal arts and steered her toward a major—and a career—in writing.

“I never really understood how to write or read before I took that class,” says Fitzhugh, who majored in English in the College of Arts and Letters. “It was about literature and writing, what an impact words can have, and what you can find in between the lines.”

The students read classic books and completed essays connecting them to their own lives. They wrote short fictional stories and read them to the class. They engaged in thoughtful discussions about conflict and resolution.

Now a successful television promotion writer, Fitzhugh says if it were not for Notre Dame and that particular seminar, her career path would likely have taken a very different direction.

The Power of Words 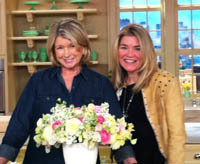 Fitzhugh lives in New York City and owns her own company, Fitz You Creative, which produces commercials that advertise television shows including, most recently, Anderson Cooper’s syndicated talk show, Anderson Live. Network stations around the country air the promotions to attract an audience to a given day’s episode.

Before starting Fitz You Creative, Fitzhugh worked for seven years as creative director for The Martha Stewart Show. She also led the promotion departments for Extra and The Rosie O’Donnell Show.

“Promotion is a tiny niche market, and there are not many of us out there,” she says. “But it’s all about the words you choose. You want to keep your viewer in mind and speak to the viewer without revealing too much.”

When Fitzhugh creates a promotion, which usually lasts 30 seconds, she must write the script and create a video to go with it, containing images and sound bites about the upcoming episode. In the case of a live television show like Anderson Live, Fitzhugh’s job becomes more difficult because she must create the promotions for an episode that hasn’t happened yet.

“I call it ‘mini-movie-making’ because you’re making something out of nothing,” she says. “You get to write it, shoot it, produce it, and edit it. It’s also something that goes out every day, so it’s instant gratification and fun to get feedback on the spot.”

While a student at Notre Dame, Fitzhugh learned the building blocks of writing, such as how to write an opening sentence, develop characters, use the right tense, and avoid passive voice. Without these skills, she says, you cannot reach your full potential as a writer.

“It’s like cooking. You’ve got to learn the tools of French cooking before you can ever become the kind of cook you want to be,” she says. “All the professors in Arts and Letters taught me the basic tools of writing.”

Fitzhugh began her writing career with an internship at an advertising agency that handled marketing for Blockbuster and Wal-Mart in Kansas City. She started writing television promotions after an executive at the CBS affiliate in New York City decided to take a chance on her a few years later. From there, she continued to find work with various television shows, shaking hands with celebrities as she promoted their programs.

When she looks back on her career path, Fitzhugh also remembers one of her first writing jobs as a reporter for The Observer, Notre Dame’s student-run newspaper.

“I started writing feature columns and then would see them posted outside people’s dorm rooms on the little pin boards,” she says. “It was exciting to discover that you could have an impact on someone’s day—or life—with a few words.”

That revelation propelled her career in the entertainment industry and continues to sustain her, she says.

“I’m still waiting for the magic to end,” Fitzhugh says. “It’s just so much fun. I’m not curing cancer, but I love what I do. I still can’t believe the experiences that I’ve had.”