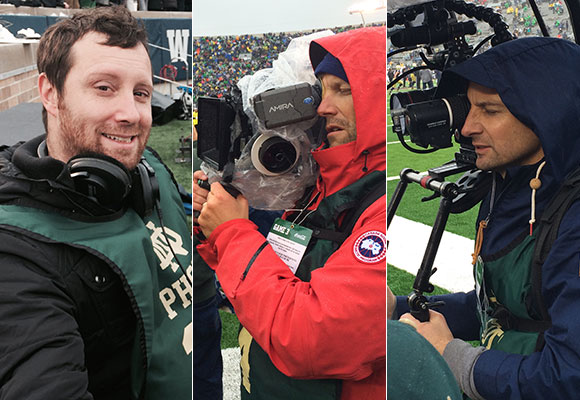 As the rain fell, hours before kickoff, three students followed filmmaker Justin Mitchell ’95 as he scrapped his shooting plans and made new ones.

Mitchell was filming two homeless, pre-teen girls as they attended their first Notre Dame football game. He had developed a plan in his head for how he was going to tell their story, but he hadn’t counted on the rain.

The dreary weather meant abandoning certain shots and finding new ones on the fly. He also needed a crew he could trust to move quickly and keep his camera and other gear from getting soaked.

“It seems simple, but it’s not as simple as you’d think,” Mitchell said.

“They were just down for anything and everything,” he said of the students who helped make At Home with the Irish. “It was like a lot of jobs in the film world. Sometimes you have to deal with things that happen fast, and you have to think on your feet.”

Where Film and Football Meet

Kohs told the story of the sounds of game day through a blind fan, while Canzoniero followed AnnaLynne McCord, an actress and advocate for sexual assault victims.

Producing “First Time Fans” with Fighting Irish Digital Media, Mandell wanted to give the alumni full access to a Notre Dame football game. But he also wanted to make existing students part of the project, so they could see what it actually means to be “on set.”

In class, students are often thinking about how their grades will be affected by choices they’re making. When students are working with a filmmaker on a professional-quality project, they’re focused solely on the task at hand.

They’re also able to see how what their professors have been talking about applies in the real world, the filmmakers said.

“When I was a student, I wondered how things were done, how a film was made. You never really knew for sure,” said Kohs, who won 10 Emmy Awards while at NFL Films and now directs commercials and documentaries. “It wasn’t in a textbook, and there’s no single way to do something.”

How to Tell a Story 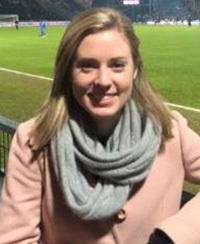 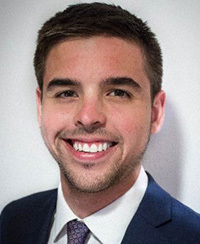 For seniors Maureen Gavin and Brian Lach, the project offered a chance to learn how to tell someone’s story though film. And that’s a skill both students will need to master as part of their prospective careers.

Gavin, an FTT major, spent the summer interning with NBC News in New York City; she hopes to return there to work after graduation.

During the shooting of “First Time Fans,” Gavin was a crewmember on Canzoniero’s film, #AnnaLynneGoesToCollege. She found it especially beneficial to see how Canzoniero—director of feature films The Marconi Bros. and Don Peyote—planned to use the footage he was collecting to weave a narrative.

“That’s all relevant experience for what I want to do, as far as storytelling,” she said.

Lach, an FTT and information technology management student, hopes to one day open and run his own production company. He was part of Kohs’ production team on Blind Faith, and got a taste of the craziness that comes with shooting a film.

As part of the project, Kohs shot interviews in Indianapolis with the film’s subjects—a blind 8th-grader named Mitchell and his family. The jam-packed, one-day excursion was exhausting, Lach said, but it showed him exactly how a film crew has to work in order to tell a compelling story.

“Actually going out there and working on these things helps you become a utility player, and gives you the kind of experience you wouldn’t otherwise have,” Lach said.

What the Future Holds

In addition to his FTT teaching duties, Mandell is currently working to bring three other alumni to film stories during the 2015 football season, with students again aiding in production. And in the fall, Blind Faith and At Home with the Irish were nominated for regional Emmy Awards for outstanding achievement for a sports program by the Chicago/Midwest chapter of the National Academy of Television Arts and Sciences.

After returning to campus for their productions, Mitchell and Kohs are hopeful such opportunities will continue for Notre Dame’s current FTT majors. When they were undergraduates, similar programs to gain real-world experience didn’t exist. (Kohs was an American studies major; Mitchell studied anthropology). Instead, they pieced together what knowledge they could through courses, internships, and on-campus experiences that helped set them up for future success.

The “First Time Fans” series and other programs available to FTT students are so important, the filmmakers said, because it shows what will be expected of them in their first jobs.

Those experiences are also preparing them for the days when they’ll be the ones calling the shots.