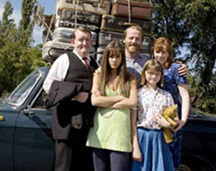 Award-winning film producer Leslee Udwin will introduce “Mrs. Ratcliffe’s Revolution” at the film’s U.S. premiere Thursday (April 10) at 7p.m. in the Browning Cinema of the DeBartolo Performing Arts Center at the University of Notre Dame.

The event is part of the Humor in European Film series, presented by Notre Dame’s Nanovic Institute for European Studies. Tickets for the premiere performance and a second showing at 10p.m. that evening are $3 to $6 and are available at the center’s box office or may be purchased over the phone at 574-631-2800.

Directed by Billie Eltringham, “Mrs. Ratcliffe’s Revolution” is a dark comedy that tells how one woman finds her voice, takes control of her life and restores the balance to her distinctively dysfunctional family. In her presentation, Udwin will share her experiences as a producer and her inspiration for the movie, which is based on the true story of a family’s defection to – and later, escape from – East Berlin in the 1960s.

Udwin’s other films include “Who Bombed Birmingham” and “East is East,” which won 25 international awards, including British Film of the Year, the 2000 Cannes Media Prize and Best Film at the Galway Film Festival. Udwin also won the London Critics’ Circle Award for British Producer of the Year in 2000.

The Nanovic Institute is dedicated to broadening the learning experience at Notre Dame by supporting teaching, research and events that inform students and faculty about the countries and cultures of contemporary Europe.

Originally published by Jennifer Lechtanski and Julie Hail Flory at newsinfo.nd.edu on April 07, 2008.