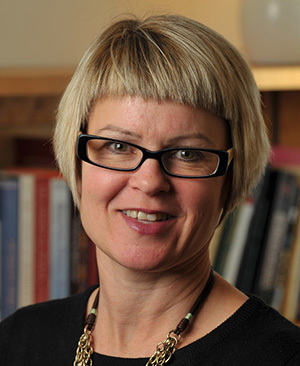 Pamela Robertson Wojcik—a professor of film in Notre Dame’s Department of Film, Television, and Theatre—has been elected president of the Society for Cinema & Media Studies.

A former member of the organization’s board of directors, she will serve two years as president-elect beginning July 1, then serve as president from 2017 to 2019.

“It’s a wonderful chance to engage with the discipline across the world,” Wojcik said. “It’s a great opportunity to have a role in shaping the conversation about film and media, and helping to think through issues in the profession—hopefully benefiting a lot of scholars and scholarship.”

Founded in 1959, the society now has 3,000 members in more than 500 institutions across 38 nations. It is the leading scholarly organization devoted to film, television, and related media.

Wojcik is entering the leadership positions at an exciting time for the organization, she said. It recently hired its first full-time executive director following a period of rapid membership expansion.

In addition to being the group’s delegate to the American Council of Learned Societies, Wojcik hopes to use her time in office to explore hosting smaller events around the country instead of concentrating solely on a large annual conference.

Another key priority will be further outlining the field of study the society focuses on. What began as an organization devoted to film has since expanded to television and other forms of media, but the world of electronic communication is evolving rapidly.

“The papers that we’re getting are all over the place, on any kind of digital technology—from Google Maps to undersea cameras,” she said. “The question will be how we define and limit what we do.”

Wojcik, who is currently finishing a book called Fantasies of Neglect: Imagining the Urban Child, first presented a paper at the society’s annual conference in 1989, and has attended almost every year since then.

The event has been a frequent source of inspiration, she said. The idea for her 2010 book, The Apartment Plot: Urban Living in American Film and Popular Culture, 1945 to 1975, was sparked during a presentation there.

“It’s a very warm community where you can make really wonderful, lasting contacts,” she said. “Some of my most important mentors are people I’ve talked to when I was giving a paper or they were giving a paper. There really is a very strong sense of community that has continued even as the organization has gotten very large.”