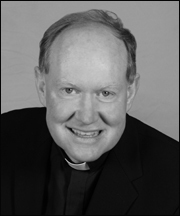 Rev. Timothy R. Scully, C.S.C., professor of political science and director of the Institute for Educational Initiatives (IEI) at the University of Notre Dame, will present a speech titled “Higher Education: Signs of Hope” at the White House Summit on Inner-City Children and Faith-Based Schools on April 24 (Thursday) in Washington, D.C.

In his address to the group of faith-based leaders, policymakers, and business and foundation leaders, Father Scully will discuss the role of higher education in supporting inner-city and faith-based schools. He also will highlight the strategies that Notre Dame and its Alliance for Catholic Education (ACE), which Father Scully founded in 1994, have developed to catalyze the renewal of the nation’s Catholic schools.

Accompanying Father Scully to the White House will be a group of Notre Dame faculty and staff also invited to participate in the event: Rev. Sean McGraw, C.S.C., the co-founder of ACE and the program’s chaplain; Rev. Lou DelFra, C.S.C., program coordinator for the Office of Campus Ministry; T.J. D’Agostino, programs coordinator for the IEI; and Steve Perla, director of ACE consulting and a policy advisor on Catholic education for the U.S. Conference of Catholic Bishops. Nicole Stelle Garnett, John Cardinal O’Hara, C.S.C., Associate Professor of Law, also will be in attendance.

A fellow of Notre Dame’s Helen Kellogg Institute for International Studies, Father Scully focuses his research on comparative political institutions, especially political parties and democratic governability. He oversees the work of the University’s Center for Research on Educational Opportunity and ACE, Notre Dame’s signature program that provides hundreds of Catholic school teachers to under-served communities across the country.

Father Scully served as Notre Dame’s executive vice president from 2000 to 2003, and as vice president and senior associate provost from 1994 to 2000. He serves as a Fellow and Trustee of the University.

Ordained a Holy Cross priest in 1981, Father Scully was graduated from Notre Dame in 1976 and earned master’s and doctoral degrees in political science from the University of California, Berkeley. He is a member of the Trinity Foundation Board in Dublin, Ireland; the Woodrow Wilson Center Board; and the Inter-American Dialogue in Washington, D.C., as well as the New York Council on Foreign Relations. He serves as a trustee of the University of Notre Dame, Australia.

The ACE program provides college graduates an opportunity to earn master of education degrees while serving as teachers in understaffed Catholic schools nationwide. In exchange for a modest stipend and a tuition-free graduate program, the ACE participants make a two-year commitment to teach in these schools.

More than 85 recent college graduates from a wide variety of educational disciplines enter ACE each year. They take courses and participate in teacher training projects at Notre Dame during their two summers in the program and are assigned to full-time teaching positions at schools in more than 30 cities and 14 states during the academic year. After two years, the students graduate with a master’s degree, and about 75 percent elect to remain in education.

Originally published by Julie Hail Flory at newsinfo.nd.edu on April 18, 2008.