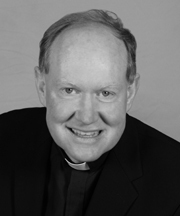 Rev. Timothy R. Scully, C.S.C., professor of political science and director of the Institute for Educational Initiatives at the University of Notre Dame, has been recognized as an outstanding teacher with a Crystal Apple Award from Michigan State University’s College of Education. He received the award and delivered the keynote address at a dinner reception held last month in East Lansing, Mich.

Father Scully is one of 25 educators to receive this year’s Crystal Apple Award, presented annually to teachers, professors, administrators and counselors who represent excellence and commitment to the teaching profession.

A fellow of Notre Dame’s Helen Kellogg Institute for International Studies, Father Scully’s research and teaching focus on comparative political institutions, especially political parties and democratic governability. He oversees the work of the University’s Center for Research on Educational Opportunity and the Alliance for Catholic Education (ACE), Notre Dame’s signature program that provides hundreds of Catholic school teachers to under-served communities across the country, which he founded in 1993.

Father Scully served as Notre Dame’s executive vice president from 2000 to 2003, and as vice president and senior associate provost from 1994 to 2000. He serves as a Fellow of the University.

Ordained a Holy Cross priest in 1981, Father Scully was graduated from Notre Dame in 1976 and earned master’s and doctoral degrees in political science from the University of California, Berkeley. He is a member of the Trinity Foundation Board in Dublin, Ireland; the Woodrow Wilson Center Board; and the Inter-American Dialogue in Washington, D.C., as well as the New York Council on Foreign Relations. He serves as a trustee of the University of Notre Dame, Australia.

Originally published by Julie Hail Flory at newsinfo.nd.edu on November 13, 2007.