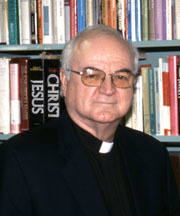 Rev. Richard P. McBrien, Crowley-O’Brien Professor of Theology at the University of Notre Dame, will receive an honorary doctor of humane letters degree at the Sunday (June 15) commencement exercises of DePaul University of Chicago.

DePaul is honoring Father McBrien for being “a prominent voice for inclusiveness and tolerance in the church and for active participation by lay members in the liturgy and other church activities” and for having “greatly advanced public understanding of the Catholic faith.”

A priest of the archdiocese of Hartford, Conn., Father McBrien has been a member of Notre Dame’s faculty since 1980 and served as chair of the theology department from 1980 to 1991.

Father McBrien’s scholarly interests include ecclesiology, the relationship between religion and politics, and the theological, doctrinal and spiritual dimensions of the Catholic tradition. He is author or editor of numerous books including “Catholicism,” “Church: the Continuing Quest,” “Caesar’s Coin: Religion and Politics in America,” “Lives of the Popes” and “Lives of the Saints.” He also was general editor of “The HarperCollins Encyclopedia of Catholicism.”

In addition to writing a syndicated weekly theology column for the Catholic press since 1966, Father McBrien often comments on the Catholic church for television and radio programs.

Originally published by Michael O. Garvey at newsinfo.nd.edu on June 13, 2008.