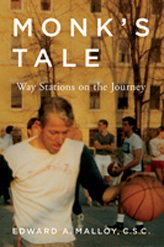 On Nov. 14, 1986, at a news conference in the Morris Inn not much more than an hour after the University of Notre Dame’s board of trustees had elected him its 16th president, Rev. Edward A. Malloy, C.S.C., said that he hoped to be a “peripatetic president.”

It was an arresting and evocative phrase. It could mean that the University’s president-elect was an adherent of a strain of Aristotelian philosophy, or that he liked to travel, or that he revered a sort of intellectual cosmopolitanism, or it could mean all of those things at once.

Monk’s Tale: Way Stations on the Journey, published this month by the University of Notre Dame Press, suggests that the most inclusive definition of “peripatetic” is the appropriate one, or at least the one that seems to be preferred by Monk.

Following Monk’s Tale: The Pilgrimage Begins, the first volume of what will become a three-volume autobiography, Way Stations on the Journey concerns Father Malloy’s life between 1974, the year he joined the University’s Department of Theology faculty, and his election to the presidency. This second volume, he writes in a prologue, is intended “to prepare the ground” for the third, which will treat his 18 years as president of Notre Dame.

The years described in Way Stations on the Journey, were inarguably preparatory years. As befits a unique institution of higher learning, Notre Dame’s presidency is a unique office which requires a unique apprenticeship, and Father Malloy’s apprenticeship began with demanding and intertwined academic, administrative, and pastoral commitments.

Having completed his doctoral studies at Vanderbilt University in 1973, he returned to the Notre Dame campus while still at work on his doctoral dissertation. Well along in, but far from finished with what would eventually become a 242-page tome entitled “Contemporary Catholic Appropriation of H. Richard Niebuhr’s Ethics of Responsibility,” he found himself “a bit surprised,” as he put it, to be assigned director of the 20 students in the college program of Moreau Seminary.

That characteristic inclination to laconic understatement was a feature of the first volume of Monk’s Tale, and continues throughout Way Stations on the Journey, even as its author recounts his days as on the staff of Moreau; a sabbatical year spent at Berkeley to write his book, Homosexuality and the Christian Way of Life; his years as an assistant rector in Sorin Hall, the men’s dormitory which remained his home throughout his presidency and where he continues to reside today; his teaching and research as a Notre Dame theologian; the institution of “Monk’s Hoops,” a standing informal basketball game in which he competed with students, fellow faculty and administrators; his years as Notre Dame’s vice president and associate provost and as a University trustee; and the international travel his expanding responsibilities had begun to make so agreeably necessary. 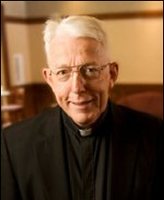 One of his international destinations was Rome, and Father Malloy devotes a full chapter of Way Stations to his visits there representing Catholic higher education in America in the consultations which led to the publication and implementation of Ex Corde Ecclesiae, Pope John Paul II’s apostolic constitution on Catholic colleges and universities.

Acknowledging the mixed reactions to that document, Father Malloy nevertheless expresses confidence that it has helped Catholic schools generally and Notre Dame particularly to arrive “at a much clearer understanding and articulation of what makes us distinctive. In our curriculum, in our residence life, in our worship, in our research priorities, in our hiring, in our policy formulation, in our extracurricular activity (including the service we render), in our formal and informal relationship to the local bishop (and to the national and universal Church), I am convinced that we fulfill, within human limits, the most inspiring formulations of Ex Corde Ecclesiae about the nature and vocation of a Catholic university.”

In all these matters—what makes Notre Dame distinctive, how well it responds to its vocation, and how it contends with human limits in doing so—few individuals have played as formative a role as Notre Dame’s president emeritus. The final and forthcoming volume of Monk’s Tale will have to do with how he played it, and that, too, should be well worth the reading.