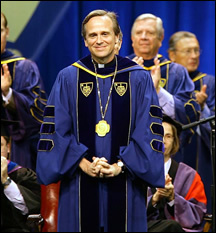 Citing the wisdom of popes and priests, saints and scholars, and, of course, his mom, Rev. John I. Jenkins, C.S.C., challenged the University community in his presidential inaugural address Friday (Sept. 23) to “build a Notre Dame that is bigger and better than ever – a great Catholic university for the 21st century.”

During a two-and-one-half-hour convocation ceremony witnessed by some 4,000 spectators in the Joyce Center arena, Father Jenkins was formally installed as Notre Dame’s 17th president. Like all of his predecessors, and in accordance with the University’s by-laws, he is a priest of the Indiana Province of the Congregation of Holy Cross, Notre Dame’s founding religious community.

It was, in fact, Notre Dame founder, Rev. Edward F. Sorin, C.S.C., to whom Father Jenkins referred most often during his 35-minute speech. He began his address by quoting from Father Sorin’s letter to his religious superior, Rev. Basile Moreau, C.S.C., just days after founding Notre Dame in 1842. “This college,” Father Sorin predicted, “will be one of the most powerful means of doing good in this country.”

In his closing remarks, Father Jenkins again referred to the University’s founder. He told the well-known story of the fire of 1879 that destroyed the Main Building and then quoted Father Sorin’s famed remarks to a stunned campus community: “I came here as a young man and dreamed of building a great university in honor of Our Lady. But I built it too small, and she had to burn it to the ground to make that point. So, tomorrow, as soon as the bricks cool, we will rebuild it, bigger and better than ever.”

Father Jenkins then made a similar proclamation for a new era.

“With respect and gratitude for all who embraced Notre Dame’s mission in earlier times,” he said, “let us rise up and embrace the mission for our time: to build a Notre Dame that is ‘bigger and better than__ever’ – a great Catholic university for the 21st century, one of the pre-eminent research institutions in the world, a center for learning whose intellectual and religious traditions converge to make it a healing, unifying, enlightening force for a world deeply in need. This is our goal. Let no one ever again say that we dreamed too small.”

Father Jenkins began his address with words of appreciation to his two most immediate predecessors, Fathers Theodore M. Hesburgh, C.S.C., and Edward A. Malloy, C.S.C., who combined to lead Notre Dame for the past 53 years. He also thanked his family, with special acknowledgment of his mother, Helen, who he praised for her ability to make all 12 of her children “feel important and loved to the same degree at the same time. If I ever display any of that talent in the future, and I hope I do, you can be sure it did not originate with me.”

As he focused on the future, Father Jenkins observed that in a world that is both increasingly secular and more radically religious, Notre Dame is in a unique position to “think and speak and act in ways that will guide, inspire, and heal – not just for the followers of the Catholic faith, but for all our neighbors in the nation and the world.”

He noted that among the world’s other great universities, there is a “disconnect between the academic enterprise and an over-arching religious and moral framework that orients academic activity and defines a good human life. My presidency will be driven by a whole-hearted commitment to uniting and integrating these two indispensable and wholly compatible strands of higher learning: academic excellence and religious faith.”

In fact, Father Jenkins remarked, the first university in 1088 in Bologna, Italy, and other early institutions of higher learning were inspired and stimulated by deep principles in the Catholic tradition. He said many still define Notre Dame, and highlighted three:

Father Jenkins said he would embrace such age-old principles as he charts a future course for Notre Dame. Among the goals he intends to pursue:

As he concluded his inaugural address, Father Jenkins asserted: “Notre Dame is different. Combining religious faith and academic excellence is not widely emulated or even admired among the opinion-makers in higher education. Yet, in this age especially, we at Notre Dame must have the courage to be who we are. If we are afraid to be different from the world, how can we make a difference in the world?”

The convocation began with Rev. James Foster, C.S.C., leading the singing of “America the Beautiful,” followed by the invocation, led by Rev. E. William Beauchamp, C.S.C., president of the University of Portland and former executive vice president of Notre Dame.

Following a performance by the University’s Concert Band and choirs of “Hallelujah from Christ on the Mount of Olives,” Patrick F. McCartan, chair of the Board of Trustees, began the investiture ceremony with the presentation of two symbols – the Presidential Medal, which symbolizes the office itself and the origins and purposes of the University, and the Presidential Mace, which represents the authority of the office.

Just before placing the medal over Father Jenkins’ head, McCartan read: “The Reverend Father John I. Jenkins, C.S.C., on behalf of the Trustees of the University, I commend to you the presidential leadership of the University of Notre Dame du Lac and officially invest you as its 17th president. We welcome you to the rights and responsibilities of this office. May God grant you wisdom as you lead Our Lady’s University.”

McCartan then followed with the presentation of the mace, saying: “By tradition the authority of a university’s primary leader long has been represented by a mace. In calling you forth to leadership, I commit to your care this symbol of presidential authority and charge you with upholding the tradition of strong leadership at Notre Dame among our academic colleagues and within the Church. The Trustees, faculty, students, staff, alumni, and all who belong to the Notre Dame family look to you to exercise your authority with wisdom, compassion, and vigor. Congratulations.”

The convocation was preceded by an academic procession of nearly 1,000 University faculty, trustees, administrators, student leaders, representatives of learned society and other colleges and universities worldwide, and Notre Dame alumni. Wearing academic robes in a rainbow of colors, the participants walked from the Main Building, through the Main Quad, past DeBartolo Hall and the stadium and on to the Joyce Center. Members of the Notre Dame Band led the procession and provided music with an international theme at five locations along the route. An original piece by Kenneth Dye, director of bands, titled “Altius” (Latin for “Higher”), accompanied the academic procession into the Joyce Center.

Following the investiture, a closing reception took place on the quadrangle adjacent to the Hesburgh Library reflecting pool, and students hosted an inaugural ball on the South Quad in the evening.

Father Jenkins, 51, was elected April 30, 2004, by the Board of Trustees to a five-year term as president and began serving July 1. He is just the third Notre Dame president in 53 years, following Father Hesburgh, who led the University for 35 years, from 1952 to 1987, and Father Malloy, who served for the past 18 years.

A professor of philosophy and member of the Notre Dame faculty since 1990, Father Jenkins had served from July 2000 until his election as president as a vice president and associate provost at the University.

Father Jenkins specializes in the areas of ancient philosophy, medieval philosophy and the philosophy of religion. He is the author of “Knowledge and Faith in Thomas Aquinas,” published by Cambridge University Press in 1997.

Father Jenkins earned master’s and doctoral degrees in philosophy from Oxford University in 1987 and 1989. He earned his master of divinity degree and licentiate in sacred theology from the Jesuit School of Theology at Berkeley, Calif., in 1988. Prior to entering the Congregation of Holy Cross, he earned bachelor’s and master’s degrees in philosophy from Notre Dame in 1976 and 1978, respectively.

Father Jenkins was ordained a priest in Notre Dame’s Basilica of the Sacred Heart in 1983. He served as director of the Old College program for Notre Dame undergraduate candidates for the Congregation of Holy Cross from 1991 to 1993.

Originally published by Dennis Brown at newsinfo.nd.edu on September 23, 2005.