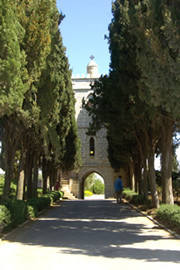 Rev. John I. Jenkins, C.S.C., president of the University of Notre Dame, will lead a delegation of University administrators and faculty to Jerusalem for a conference May 30 (Wednesday) marking the 35th anniversary of the Ecumenical Institute for Theological Studies at Tantur.

The conference, “Perspectives on Hope – The Perspective of Hope,” will explore the role of religious faith in making peace.

“Notre Dame is holding fast to this experiment in interreligious dialogue, especially when some have given up on Christian unity and others have despaired of any peace possibilities in the Middle East,” Father Jenkins said. "To mark the 35th anniversary of the institute, the University has invited leading scholars to address bottom-line questions of faith and reason: Where can one find hope in an apparently hopeless situation? What might hope look like?

“We Christians have something to contribute on this topic, and much to learn.”

The institute has been administered by Notre Dame since 1972 when then-President Rev. Theodore M. Hesburgh, C.S.C., joined Pope Paul VI in establishing Tantur as a gathering place for scholars and pilgrims of all Christian faiths. The institute stands on a hilltop between Jerusalem and Bethlehem and welcomes visitors from all over the world to study, pray and live together in the Holy Land.

The Notre Dame delegation will include members of Tantur’s advisory board, which will meet May 27 to 29 (Sunday to Tuesday). The conference, organized by John Cavadini, chair and associate professor of theology, will take place the next day.

Father Jenkins is chair of the Tantur advisory board, which includes the institute’s rector, Rev. Michael McGarry, C.S.P., as well as members of the Anglican, Lutheran, Reform and Russian Orthodox churches.

“The University of Notre Dame once again has exercised its leadership and vision in refusing to retreat from a greater, more hopeful vision of the Middle East,” Father McGarry said.

More information on the Ecumenical Institute for Theological Studies at Tantur is available from its Web site at http://tantur.org/

Originally published by William Schmitt &Michael O. Garvey at newsinfo.nd.edu on May 25, 2007.