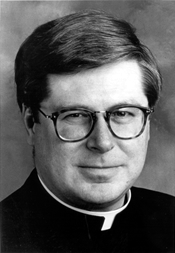 The Mathis Award, named in honor of Rev. Michael Mathis, C.S.C., who founded the graduate school of liturgy at Notre Dame, is annually given to a person or organization making significant contributions to the renewal of the liturgy in the United States. Father Joncas, its 24th recipient, will receive the award and give the keynote address at the center’s annual liturgy conference, which will be held June 19 to 22 on campus.

“Being a man of multiple talents, Father Joncas works in multiple venues,” Fagerberg said. “In the academy he is known as a proficient researcher, exploring topics ranging from the architecture of an Italian baptistery, to musical semiotics, to the liturgical rites of the Church, resulting in three books and over a hundred articles. In the classroom he is known by his students as an engaging and stimulating teacher. In the Church he has served as parochial vicar, a campus minister, and pastor. And in the world of liturgical music he is known for composing and arranging over 200 pieces of liturgical music, including some of the most often sung pieces in the past decades.”

Father Joncas, who earned a master’s degree in liturgical studies from Notre Dame in 1978, holds advanced degrees from the Pontifical Liturgical Institute at the College of Saint Anselm in Rome. He was ordained a priest for the archdiocese of Saint Paul/Minneapolis in 1980 and is a member of the theology faculty at the University of Saint Thomas.

Originally published by Michael O. Garvey at newsinfo.nd.edu on March 03, 2006.