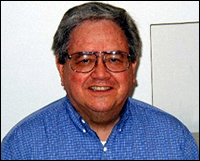 Rev. Virgilio P. Elizondo, professor of pastoral and Hispanic theology and fellow of the Institute for Latino Studies at the University of Notre Dame, will receive the 2007 Community of Christ International Peace Award for his work in advocating full inclusion and justice for immigrants Friday (Oct. 26) in Independence, Mo.

The ceremony, which is part of the Community of Christ Peace Colloquy titled “Real World, Real Peace: Sharing the Peace of Jesus Christ,” will be cybercast live in English and Spanish at www.CofChrist.org .

Known as the “father of U.S. Latino religious thought,” Father Elizondo, a co-recipient of the award along with Dolores Huerta, will deliver a talk titled “Peace of Jesus: Asserting the Humanity of All” on Saturday (Oct. 27).

Father Elizondo, who received Notre Dame’s highest honor, the Laetare Medal, in 1997 and a Hispanic Heritage award in 2002, has been on the University’s faculty since 2000. A native of San Antonio, where his Mexican immigrant parents owned a grocery store, he spent most of his life there and served for many years as pastor of San Fernando Cathedral. The Sunday Spanish Mass at which he presided became famous internationally when it was televised and carried via satellite from the cathedral to more than 1 million households.

Father Elizondo became prominent as an advocate for underpaid and exploited Mexican-American laborers in his archdiocese during the early 1970s, and as an increasingly self-conscious Mexican-American community began to assert itself politically and culturally, he established the Mexican-American Cultural Center at Assumption Seminary.

Father Elizondo speaks seven languages and has written numerous books, including “The Future is Mestizo,” “Galilean Journey,” and “The Human Quest.”