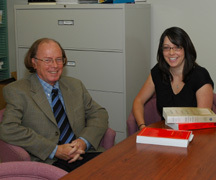 Both had the chance to participate in an Institute for Scholarship in the Liberal Arts (ISLA) program that allows Notre Dame faculty members course-release time for study of the Catholic intellectual tradition.

Jensen and Buckles are two of seven participants in the program since its inception two years ago, says Ken Garcia, associate director of ISLA.

“The program is designed to make faculty members familiar with the Catholic tradition and how they might incorporate relevant aspects of Catholic teaching into their coursework,” he explained.

The program is open to both Catholic and non-Catholic faculty members from any college or school in the University, excluding the theology department. It allows faculty to be released from one course to allow time for study, and offers a $7,500 stipend to the department to provide for their replacement.

Rather than taking a formal graduate seminar, both Buckles and Jensen worked on independent reading and research with members of the theology faculty.

Jensen, department chair and professor of economics and econometrics, is interested in environmental economics—what would people be willing to pay to preserve the rain forest, for example. Part of the reason for his taking the course, he says, was to better understand how the environment figures into Catholic social teaching.

“I read all the papal encyclicals, and just kept reading from there,” Jensen says. “I also read [Notre Dame theologian] Dick McBrien’s 1,200-page tome `Catholicism.’ I became curious about what it means to be Catholic, as well as what it means to pursue the Catholic intellectual tradition.”

The pope, he notes, has begun directly addressing environmental concerns.

“He points out that in Genesis, when man inherits the earth, it doesn’t mean he inherits the earth and wastes the resources,” Jensen said. “John Paul II specifically argues that we have to be good stewards of the environment.”

For Jensen, one of the most interesting aspects of his studies was that he learned a great deal about what the popes actually said—as opposed to what people think they said.

Buckles, assistant professor of economics and econometrics, worked through a series of readings with moral theologian Todd Whitmore, associate professor of theology and director of the Program in Catholic Social Tradition, beginning with Pope Leo XIII’s 1891 encyclical Rerum Novarum and moving forward through documents on the role of women in the Church. It was interesting, she notes, to see how the Church’s teachings have evolved over the last 30 years.

Her studies also have had the interesting result of making her—in many cases—more educated about Catholic social teaching than her students who were raised in the faith. They may know the principles, but have never read the actual documents.

What she’s gained from the program is a better understanding of her students and what they know about Church teachings.

“It’s up to me to make sure my students understand that economic models aren’t inconsistent with Catholic social teaching,” she said. “Having had this class, I feel much more prepared to do that.”

“I think (the program) was quite valuable,” Jensen says. “I don’t have the same kind of understanding I’d have if I’d been raised Catholic, but I have a much better understanding.”

He’s continued his reading, he adds, and now has a better idea of what the unique mission of Notre Dame is.

“It can’t help but make me a better teacher, as well as a better colleague to everyone on campus.”

Originally published by Carol C. Bradley at newsinfo.nd.edu on December 01, 2008.