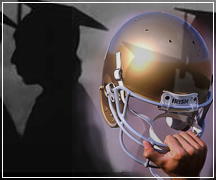 Notre Dame offensive lineman Dan Santucci would like to play professional football after this season with the Fighting Irish.

But if the football thing doesn’t work out, Santucci has prepared himself to make use of his bachelor’s degree in marketing and the additional skills he’s picked up in computer application classes this fall.

He attributes part of that preparation to a relationship he struck up with marketing professor Kevin Bradford as part of an honors program established by the Office of Academic Services for Student-Athletes (ASSA).

“He always said, `Work hard, keep doing what you’re doing. Always keep your options open,’ " says Santucci, who met with Bradford through last academic year while he was still an undergraduate.

“It was just a great chance outside of football to talk to faculty, to get their opinion on school material and the outside world,” says Santucci, who valued the opportunity to “get to know a faculty member kind of as a friend.”

The honors program is composed of student-athletes who are achieving both in the classroom and athletic venues. The goal is to provide them with an opportunity to experience a faculty/student relationship in a unique and meaningful way.

“The mentor can help guide these exceptional students to opportunities for internships, research, scholarships and future jobs,” says Laura Kerls, who administers the program for ASSA. “They also may simply be a person the student-athlete can talk to. The personal relationships that develop are essential to making this program successful.”

Fencer Rachel Cota worked last year with anthropologist Daniel Lende, who helped her identify an eight-week summer service program in Africa that she says was a life-altering experience.

ASSA is charged with supporting and challenging all student-athletes as they strive for academic success. A few of the services offered through ASSA include tutoring, time management and monitored study halls.

“Sometimes these students are so focused on their sport and academics, they don’t make the time to develop relationships with faculty. Their time is so structured,” says Kerls.

On the faculty mentor side, the program attracts an amazing array of professorial supporters whose participation bears the truth of the saying: “If you want to get something done, ask someone who’s busy.”

“I think the best thing we can do for students is sit down and talk with them one-on-one,” says Mark Roche, O’Shaughnessy Dean of the College of Arts and Letters and a concurrent professor of philosophy and German. Roche mentors track team member Michael Popejoy.

Popejoy sought out Roche’s support, while Santucci relied on the program administrator to do the matchmaking. That is how physics professor Malgorzata Dobrowolska-Furdyna met soccer player Matthew Besler. She teaches physics to pre-med students, and he wants to go to medical school.

“It fits nicely. I know more or less where they’re going and what they need. And it’s fun,” says Dobrowolska-Furdyna. “These are smart kids. They’re hard working. It’s a pleasure to be part of their success story.”

“I just thought they were magnificent,” says Sayers, who helps students apply for such fellowships as the Rhodes and Marshall Scholarships and Fulbright awards.

Noting that the student-athletes included sophomores and juniors, Sayers added she was pleased the fellowship office would be able to meet with them early.

“All are potentially strong candidates for fellowships,” she said.

Originally published by Gail Hinchion Mancini at newsinfo.nd.edu on December 13, 2006.