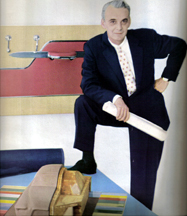 An exhibit honoring Virgil Exner, one of the world’s foremost automobile stylists of the 20th century, will be held September 29 (Saturday) from 9 a.m. to 4p.m. at the University of Notre Dame’s Stepan Center. British automotive historian Peter Grist will be in attendance to sign his recent biography of Exner.

Thirteen of Exner’s priceless production cars will be on display inside Stepan Center, and dozens of Exner era Chrysler and Studebaker production cars owned by car club collectors will be outside. Grist will sign his biography, “Virgil Exner: Visioneer,” and will discuss Exner’s impact on the era of “Fabulous Fins” in automotive design. The lecture will be held at Notre Dame’s Snite Museum of Art at 7:30p.m.

Sponsored by Notre Dame’s Department of Art, Art History and Design, the Snite Museum of Art, the Chrysler Corp. and the Studebaker National Museum, both the exhibit and lecture are free and open to the public.

A design student at Notre Dame in the 1920s, Exner worked for several American companies, most notably Chrysler and Studebaker. He became one of the world’s great automobile designers, responsible for Chrysler’s highly successful tail fin designs of the 1950s and ’60s, when his aesthetic became known as the “Forward Look.” He died in 1973.

Originally published by Susan Guibert at newsinfo.nd.edu on September 12, 2007.