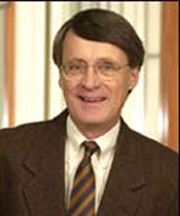 Thirteen members of the University of Notre Dame faculty were honored with excellence awards at the annual President’s Dinner held this month on campus.

Professor of marketing Michael J. Etzel , a distinguished scholar generally recognized as the “architect” of the current Department of Marketing, was honored with the 2008 Faculty Award. Nominations for the award are submitted by the faculty at large, with a committee of former award winners making the final selection.

“He is a highly recognized and accomplished scholar in consumer behavior, and has provided extensive service to the marketing profession,” the citation reads. Etzel also is a past recipient of the University’s Grenville Clark Award, and has served as chairman of the board of the American Marketing Association.

Vice president and general counsel Carol C. Kaesebier , who “has embodied the Notre Dame spirit throughout her career,” is the recipient of the 2008 Presidential Award, an honor presented to those who have given distinguished service to the University over an extended period of time. Nominations for the award are received from the faculty at large. Kaesebier, who has represented the University and assisted in its growth and development for 20 years, has announced she will retire in fall 2008.

Two faculty members were honored with the Rev. James A. Burns, C.S.C., Graduate School Award for excellence in, and commitment to, graduate education—Notre Dame Chair in Psychology E. Mark Cummings and Mark A. Stadtherr , professor of chemical and biomolecular engineering.

A prolific researcher, Cummings is deemed “a leader in developmental psychology, particularly in the field of family processes and children’s socio-emotional development.” He is revered by graduate students, it was noted, because of his exemplary mentoring and training.

Stadtherr, known worldwide for his research on the development and application of strategies for reliable engineering computing, has made broad-ranging and exemplary contributions to graduate education. In addition, Stadtherr, who also has served as director of graduate studies for the past 12 years, has played a key role in the effort to advance the technical and computing capabilities of his college and the University as a whole.

Other recipients of awards of excellence include:

Rev. Thomas E. Gaughan , C.S.C., the Rev. John “Pop” Farley, C.S.C., Award, honoring distinguished service to student life at the University. Gaughan, who is completing his 16th year as rector of Stanford Hall, is a gifted homilist known for his compassion and love for students. He also is a longtime chaplain of the Notre Dame hockey team.

Joseph W. Thomas , the Rev. Paul J. Foik, C.S.C., Award for exemplary contributions by a librarian. “A role model for his professional work and for his personal commitment to Notre Dame’s ideals and mission,” he currently leads the largest unit within the Kresge Law Library, and is playing a critical role in the Law School building and renovation process.

Thomas L. Nowak , the Grenville Clark Award, honoring volunteer activity and public service that advances the cause of human rights. Nowak, professor of chemistry and biochemistry, and his wife, Marlene, assist refugee families to resettle in South Bend, help those released from prison reintegrate into society through Dismas House, and help the homeless through the Catholic Worker House. Through the Christ Child Society, the couple also has helped clothe many poor children in the city.

Two faculty members are recipients of the Thomas P. Madden Award for outstanding teaching of first-year students. Joseph Buttigieg , the William R. Kenan Jr. Chair in English, “challenges students on their arguments and invites them to think harder and more precisely. His many grateful students recognize him as rigorous, accessible, challenging and sympathetic.” Professor of mathematics Dennis M. Snow is known for "the clarity of his explanations, the rigor of his thought, and the imagination he utilizes in keeping students excited about mathematics. Snow also displays his talents, it was noted, by playing guitar at Masses on campus.

F. Clark Power , professor in the Program of Liberal Studies, the Reinhold Niebuhr Award, honoring a person whose life and writings promote or exemplify social justice. Power “has spent his career in the field of moral and ethical education and development, with a particular emphasis on character development.” He is further described as “a teacher with a passion for justice and making education available to all,” including his students, guests at the Center for the Homeless, and at-risk teens in the local high schools.

Vittorio G. Hsle , Paul G. Kimball Professor of Arts and Letters, the Research Achievement Award. Since joining the faculty nearly 10 years ago, Hsle “has established a superb record of research and scholarship, while devoting considerable time and effort to teaching and mentoring undergraduate and graduate students.” A philosopher by training, he has made significant contributions in the areas of ethics, metaphysics, political philosophy, aesthetics and intellectual history. He is the author of 31 books, 118 papers and more than 100 international presentations. He also has been the subject of two documentaries.

Paul R. Brenner , high-performance computing engineer in the Center for Research Computing, the Rev. William A. Toohey, C.S.C., Award for Social Justice. Brenner, who has committed a part of his life to service since his days as an undergraduate, also has been recognized by the Notre Dame Alumni Association with a number of awards and distinctions for his generous service to organizations including La Casa de Amistad, Reins of Life and the Northern Indiana Center for History.

Rev. Ralph L. Haag , C.S.C., rector of St. Edward’s Hall, the Rev. William A. Toohey, C.S.C., Award for Preaching. Father Haag preaches often in the Basilica of the Sacred Heart and in the residence halls, and participates as a homilist for ndprayercast.org. His homilies “consistently offer words that inspire as well as comfort those who listen to them.” Father Haag also devotes considerable energy to working with Hispanic students on campus through Campus Ministry’s Latino student ministry programs.

Originally published by Carol C. Bradley at newsinfo.nd.edu on May 29, 2008.