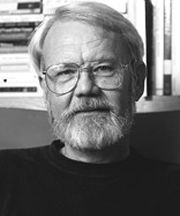 Gerald L. Bruns, William P. and Hazel B. White Professor of English at the University of Notre Dame, was among 39 English professors at leading universities participating in a recent national survey on biblical literacy sponsored by the John Templeton Foundation.

The survey report, “What University Professors Say Incoming Students Need to Know,” was released last week at Baylor University during an academic symposium on the Bible. It revealed what its author, Marie Wachlin, described as a “striking” unanimity of conviction that knowledge of the Bible is indispensable to a good education and that, in addition to being a sacred text for millions of Americans, it is also, as one participant put it the “most influential text in all of Western culture.”

“You can’t really study western literature intelligently or coherently without starting with the Bible,” according to Bruns. “You’re simply ignorant of yourself if you don’t know the Bible.”

Survey participants included representatives from all of the top-ranked schools in the 2005 U.S. News & World Report survey, “America’s Best Colleges.”

More information on the survey and the text of its final report are available on the Web at http://www.bibleliteracy.org/Site/index2.htm

Originally published by Michael O. Garvey at newsinfo.nd.edu on June 08, 2006.