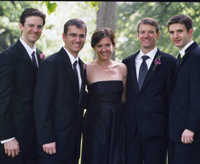 You can find Notre Dame graduates with degrees in English almost everywhere—and not just working in the classroom as teachers or professors. Indeed, according to a survey of alumni, they are thriving in a broad range of professions.

“Our graduates are in just about anything you can imagine,” says English Professor Chris Vanden Bossche, who serves as the department’s director of undergraduate studies and recently surveyed alumni on their career choices. While the most common post-graduation path is law, he reports, that is followed closely by education, business, and a variety of communications professions.

“English students learn critical thinking, writing, and speaking skills, of course—and that can be an important edge in any career,” says Vanden Bossche. “But through reading and analyzing great literature they also learn to think deeply about human life in all its variety.”

And that, he says, builds the kind of knowledge and skill base that makes studying English a great preparation for just about any career.

Consider, as just one sample of alumni success, the members of a virtual departmental dynasty: brothers Greg ’87, Jeff ’89, and Mark Miller ’05. All three Danville, Pa., natives received English degrees before moving into careers that include finance, medicine, publishing, and higher education.

Banking on the Humanities

Initially considering science, the oldest Miller sibling, Greg, says a love of literature drew him instead into the Department of English and into activities such as chairing a Sophomore Literary Festival headlined by author John Irving, who had just published The Cider House Rules.

As he approached graduation, Greg was unsure about his future career course, so he applied to law schools and graduate programs in English. He also attended a recruitment visit from an investment banking firm. Then, despite never having taken a finance or accounting class, he got—and accepted—an offer from the firm, First Boston Corp.

During his eight-week training there, Greg realized just how relevant his background in English was. The financial skills needed on the job, he says, followed naturally if candidates “had good judgment and communication skills, and were willing to work non-stop for a couple of years.”

Next, after three years at First Boston, Greg left to pursue a J.D. from Yale Law School before returning to investment banking, where he now specializes in the media sector at Greenhill & Co.

“Notre Dame and Yale Law School were fundamental to my sense of self and my future career path,” Greg says. “The intellectual vibrancy and tangible fostering of independent thinking define those cultures.”

They have also defined his career and volunteer choices, through which he has continued to nurture his passion for contemporary literature and art. Greg is currently president of White Columns, New York’s oldest nonprofit alternative art space; serves as a member of the Painting and Sculpture committee of the Whitney Museum; and is active with several other art institutions in New York and London. An avid art collector, he even founded his own art book publishing company called Gregory R. Miller & Co. in 2004.

He attributes his successes to the values, analytical skills, and curiosity that were fostered as a student. And now, he says, as a publisher, he can work “not only to enhance understanding and appreciation of art but also to make a contribution to the broader cultural dialogue.”

Following his brother Greg into Notre Dame was an inspiring, not intimidating, challenge, says Jeff Miller, who also found his undergraduate home in the English Department.

“I grew up surrounded by physicians and knew I was going to become one—but I took my dad’s advice and went another way with my undergraduate degree,” Jeff says. “I wanted to gain a different perspective and appreciate a different area of education.”

Once he graduated with his English degree, Jeff went on to medical school to become a dermatologist. He later returned to school to complete an M.B.A. as well.

“In no way does a background in the humanities mean you can’t be successful in the medical field,” Jeff says. “In fact, I think the analytical, critical thinking, and communications skills I picked up as an English major really enhanced my ability to work across disciplines. I know that will also hold true for many of my students.”

Today, Jeff works as a professor of dermatology at Penn State’s Milton S. Hershey Medical Center—and credits his success as a teacher to the time and passion he invested as a student himself.

He has continued to be a broad, eclectic reader and brings what he discovers to his medical students. A recent find includes a piece from The New Yorker on the social and monetary costs associated with the poorest 1 percent of hospital patients in Camden, N.J.

“It ties right into what I enjoyed so much in English—studying the human condition,” Jeff says, adding that, “I’m immediately going to make it required reading for my students.”

Mark, the youngest Miller, studied both English and art history before he entered investment banking.

“Three months after I was born, Greg started at Notre Dame,” he says. “We were always traveling to Notre Dame or welcoming a sibling who was coming home—I couldn’t wait to get there.”

Mark says his English coursework, starting with a British literature survey class he took as a sophomore, “brought literature alive for me.”

By senior year, he says, his English studies had also transformed his critical thinking skills. “Whether you were evaluating post-modern theories or a major work of literature, you had to be able to break down detailed material and ultimately form an opinion on complicated issues.”

English degree in hand, Mark accepted his first position after graduation at J.P. Morgan, working ininvestment banking. Now at Glencoe Capital, a Chicago-based private equity firm, Mark plans to start an M.B.A. program this summer at The Wharton School of the University of Pennsylvania.

“The ability to communicate is critical in business, from preparing a document to discussing topics with colleagues to selling the services of your firm,” he says. “And while my undergraduate coursework did not apply in any way to the ‘nuts and bolts’ of finance, it prepared me to synthesize and evaluate large amounts of material and communicate my views—and my firm’s views—on challenging topics.

“More important,” Mark says, “I developed a deeper understanding of the world around me. Both literature and art illuminate and explore the many forces that shape who we are.”