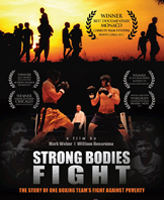 Produced by writer Mark Weber ’09 and director William Donaruma ’89, a professor in the Department of Film, Television, and Theatre, the film has been building a winning record at film festivals, including:

The Bouts, a student boxing club founded in 1920 by Knute Rockne, began supporting the Holy Cross mission in Bangladesh (formerly East Bengal) in 1931 under Coach Dominic “Nappy” Napolitano, who hoped to instill a spirit of service and sportsmanship in the students. In Napolitano’s words, “Strong bodies fight, that weak bodies may be nourished.” All proceeds from ticket sales go directly to the mission, which seeks to empower residents of the impoverished region through education.

Weber, who majored in FTT and the Program of Liberal Studies, approached Donaruma about the project while serving as student president of the Notre Dame Boxing Club. As a director, Donaruma says he was quickly drawn in by the story of the Bengal Bouts and the Holy Cross mission it supports. 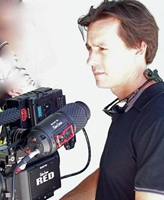 “Really no one, other than missionaries, had seen [the mission],” Donaruma says, “so it was an opportunity to see and do something that no one had done before—the idea of a sports movie based in charity. ”

In 2008, Donaruma, Weber, and a small team of filmmakers (including cinematographer John Klein ’06, another Notre Dame FTT alumnus) spent two weeks with the mission in Bangladesh.

“We thought it was going to be a bigger story about the missionaries themselves,” Donaruma says, “but they don’t really like to talk about it. We found it was really hard for them to admit it was a tough mission.”

In developing a theme for the documentary, the filmmakers focused on education, both in terms of raising awareness about the Bengal Bouts’ mission of service and the idea of education as “a primary means of uplifting the whole society,” he says.

After three years of work, the final cut of Strong Bodies Fight was released in February 2011. Instantly embraced by the Notre Dame community, the film has also been building a strong reputation on the film festival circuit.

“I think it’s hit a groove,” Donaruma says. “It took six months before it was really starting to be seen and people began taking notice. Distributors are now looking at it.”

Strong Bodies Fight is also making an impact outside the film festival circuit, inspiring other amateur boxing clubs to begin charity tournaments. “People want to replicate that, and it just spreads farther and farther,” Donaruma says.

Here on campus, it has also led to a new level of interest in the event and the work being done in Bangladesh.

“The Bengal Bouts’ income has doubled in the last couple of years, and we feel a lot of it has to do with an awareness that people didn’t have,” Donaruma says. “You’re showing college kids making an impact.

“I think that really lends to the Notre Dame mission.”