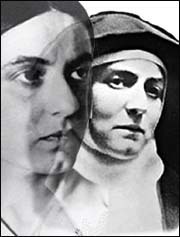 A group of University of Notre Dame students is hosting a two-day conference to examine the manner in which contemporary culture imperils the dignity of women and to describe the vocation of women in the modern world.

The conference, titled “The Edith Stein Project: Redefining Feminism,” will be held Friday and Saturday (March 28 and 29) in McKenna Hall on campus.

Placing a special emphasis this year on masculinity, fatherhood and the complementary way that men and women are called to give and receive love, the conference also will address chastity, sexual assault, theology of the body, contraception, reproductive health and marriage.

For a complete schedule of speakers or to register online, visit https://marketplace.nd.edu/cce/Edith_Stein_Project_2008_P369.cfm .

Born Oct. 12, 1891, to a Jewish family in Breslau, Germany, Edith Stein studied philology and philosophy at the Universities of Breslau and Goettingen and earned a doctoral degree in philosophy from the University of Freiburg, where she was a friend and collaborator with Edmund Husserl, the founder of phenomenology. She converted to Catholicism when she was 30 years old and 12 years later entered the Carmelite convent in Cologne. Fleeing persecution, she moved to a Carmelite convent in Echt, Holland, in 1938 but was arrested by the Nazis in 1942 during a nationwide retaliation following the Dutch Catholic bishops’ denunciation of the deportation of Jews and the expulsion of Jewish children from the Catholic school system. She died at Auschwitz on Aug. 9, 1942. Known in the Carmelite order as Sister Teresa Benedicta of the Cross, Edith Stein was canonized, or proclaimed a saint, by Pope John Paul II in 1998.

The conference will close with a Mass at 5p.m. Saturday in the Basilica of the Sacred Heart.