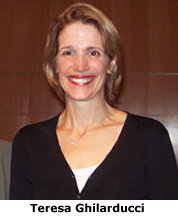 Teresa Ghilarducci, professor of economics and policy studies and director of the Higgins Labor Research Center at the University of Notre Dame, has been appointed to a California state commission which will recommend a policy to meet the state’s pension and health care obligations toward its retired employees.

The Public Employee Post-Employment Benefits Commission was announced Feb. 20 by California’s legislative leaders and Gov. Arnold Schwarzenegger, who described its members as “a diverse and talented group of people who bring with them a wealth of knowledge in financial services in both the private and public sectors as well as have an extensive background in local, state and federal governments.”

Six of the 12 commission members were appointed by Schwarzenegger and six, including Ghilarducci, by the state legislature. The commission will deliver its report to the governor on Jan. 1, 2008.

A member of the Notre Dame faculty since 1983, Ghilarducci is among the nation’s foremost experts on employee retirement pensions. She has written and edited numerous articles and books on the subject and testified before Congressional committees on Social Security, retirement and pension issues. President Clinton appointed her to the Pension Benefit Guaranty Corporation’s Advisory Board where she served from 1995 to 2002. She also served on the Board of Trustees of the state of Indiana’s Public Employees’ Retirement Fund from 1997 to 2002.

Originally published by Michael O. Garvey at newsinfo.nd.edu on February 23, 2007.