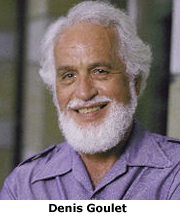 University of Notre Dame economist Denis Goulet, a pioneer in the field of development ethics, has published a new volume of his collected essays, “Development Ethics at Work: Explorations – 1960-2002.”

Published by Routledge, the book consists of a compilation of essays documenting Goulet’s contributions to the field of development ethics. Spanning more than four decades of his work, it includes accounts of the early journeys of his thinking, an exposition of the main themes he has explored, and the transition from early alternative development to alternative globalizations.

Dividing the book into three parts, Goulet examines the evolution of development ethics and the ways a development ethicist can function in varied development arenas; explores the ethical dimensions of competing change strategies; and investigates the language of interdependence which prevails in development discourse.

Goulet is a professor emeritus in the Department of Economics and Policy Studies. He also serves as a faculty fellow of both the Kellogg Institute for International Studies and the Joan B. Kroc Institute for International Peace Studies. He has conducted field research in Algeria, Lebanon, Brazil, Guinea-Bissau, Sri Lanka and Mexico and has held visiting professorships at numerous universities. His publications include 11 other books and more than 150 articles.

Goulet earned his bachelor’s and master’s degrees in philosophy from St. Paul’s College; a master’s degree in social planning from IRFED in Paris; and his doctorate in political science from the University of So Paulo, Brazil.