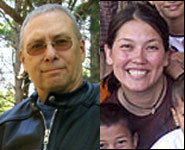 The voice of the industrial design profession in the United States, the IDSA advances the quality and positive impact of design.

A prestigious honor, fellow status is conferred upon those who “have earned the special respect and affection of the membership through distinguished service to the society and to the profession as a whole.”

As an industrial design professional, Down has received numerous patents for work in the automotive aftermarket, consumer product and marine industries. In 1986, he co-founded Prodesign Inc., an Indiana company that designs and manufactures thermoformed products. His 1987 design of Jet Wave, the first commercially produced, jet-driven, human-powered watercraft, was featured on the cover of Hammacher Schlemmer’s Spring Catalogue. General Motors, Ford, Monsanto Plastics and Stewart Superior also have featured Down’s designs in promotional publications and at international trade shows.

Conrado, honored for “the contributions of younger faculty who have made the choice to dedicate their careers primarily to the education of the next generation of designers,” earned her bachelor’s degree from Notre Dame in 1993 and master’s degree from the University of Chicago. She joined the Notre Dame faculty in 2006, and her professional work has won numerous awards, including the prestigious IDSA Gold, with national and international clients, including McDonald’s, Starbucks and Panasonic.

Conrado is founder and executive director of HOPE Initiative, a non-profit organization that uses design principles toward the alleviation of poverty in developing countries. Her scholarship examines the power and promise of design to address a host of social, global and humanitarian issues. During the last two summers, she traveled with groups of Notre Dame undergraduate students to Nepal to collaborate with disadvantaged local artisans to design, develop and produce fair trade handicrafts.