The University of Notre Dame’s Division of Student Affairs honored five students from the College of Arts and Letters at its 30th-annual Student Leadership Awards Banquet on April 7. These annual awards recognize current students who have made exceptional contributions to the Notre Dame community. 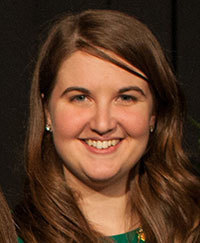 The Rev. A. Leonard Collins, C.S.C., Award, honoring a graduating senior who has made substantial personal efforts to advance the interests of students at Notre Dame, was given to Maggie Skoch, a theology and Arts and Letters pre-health from Mentor, Ohio.

Motivated by her own experiences, Skoch has been a prominent advocate for mental health awareness and education in the University community. She served as president of NAMI-ND, where she was an integral planner of Notre Dame’s Mental Illness Awareness Week, which won an award for Outstanding Club Event/Program of the Year in the 2014-15 academic year. Skoch also created opportunities for her peers to have monthly conversations about mental health through the “Espresso Your Mind” program, and has served as a member of the University’s Healthy Campus Coalition.

She has also been involved as a music mentor and director for Notre Dame’s ND Vision program, demonstrating her deep spirituality, sharing her tremendous gift for music, and inspiring people to explore their faith. 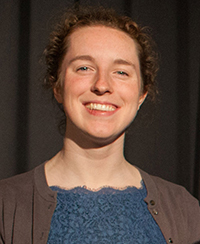 The John W. Gardner Student Leadership Award, given to a graduating senior who exemplifies the ideals of the University through outstanding community service beyond the University community, was awarded to theology major Colleen McLinden from Lakewood, Ohio.

Through work in service and legislative advocacy, McLinden has embodied the principles of Catholic social teaching during her time at Notre Dame. As a sophomore, she led a group of students working to change policy at the state level for formerly incarcerated people to gain access to food assistance. A regular in the South Bend Catholic Worker community, she has engaged low-income residents regarding the accessibility of fresh produce at the Monroe Park Co-Op. Her volunteer service in Chile, as well as her work for Catholic Relief Services, have allowed her to serve at a global level by raising awareness on global pandemics, fundraising for additional resources, and engaging her peers in prayer for global solidarity. 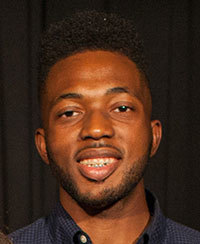 The Rev. Theodore Hesburgh, C.S.C., Award annually honors a graduating senior whose contributions have significantly advanced the climate of welcome and inclusion within or beyond the University community. This year’s recipient is sociology and Arts and Letters pre-health major Preston Igwe from Houston.

Igwe has been deeply involved with various Notre Dame student organizations, employing an inclusive and collaborative approach to his leadership. He has served as president of Wabruda, a club that works to promote brotherhood and leadership among black men on campus. He has also served as a member of Diversity Council and the Black Student Association.

An integral planning partner of the Black Man’s Think Tank program, Igwe has encouraged dialogue and conversation among his peers on campus. Through his work with Multicultural Student Programs and Services, he has been an ambassador for that office, as well as for the University, often hosting visiting students and sharing his experience at Notre Dame. His work in the local community has brought his Notre Dame peers and South Bend high school students closer together by inspiring the students and opening the minds and hearts of his classmates. 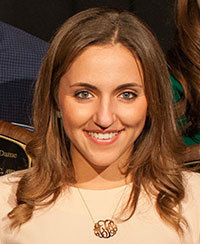 Meredith Fraser, an Italian and biological sciences major from Weston, Florida, was awarded the Mike Russo Spirit Award, honoring an outstanding undergraduate student who exemplifies the qualities for which Mike Russo was known, including service, personal character and striving to bring the best out of themselves and others.

Fraser has been committed to fostering inclusion and spirit in residential life at Notre Dame since her first year on campus. She is the current co-chair of Hall Presidents Council and former president of Ryan Hall. As president of Ryan, she brought new traditions to the hall, such as Kind Kats and ROAR Week, aimed at empowering Ryan Hall residents, building community and engaging students who did not feel like they are part of the hall community. As co-chair of Hall Presidents Council, she initiated “Reel in a Resident,” a program in which hall leaders are called each week to reach out to residents struggling in their communities and find ways to engage them. 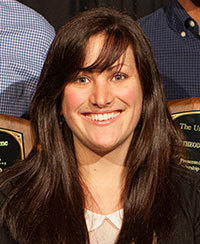 The Denny Moore Award for Excellence in Journalism was presented to Maggie Bowers, a political science and film, television, and theatre major from Wilmington, Delaware. This award is given to a graduating senior who exemplify the qualities of Moore, a former Notre Dame associate vice president, who was known for his integrity, character, commitment to Notre Dame and writing ability.

Bowers is the editor-in-chief of 2015-16 The Dome yearbook, and has strived to make the 352-page book both relevant and compelling for her peers. She has been an effective supervisor of a large staff, mobilizing them over a seven-month period to cover talked-about campus topics such as the decision to resume purchasing University licensed apparel from a limited number of factories in China, the GreenDot bystander intervention program, and the impact of the new residence halls on the campus community.