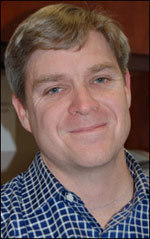 George Keegan, the University of Notre Dame’s director of foundation relations, has an interesting connection to the famous inventor and businessman Thomas Edison, and that connection, as well as a similar entrepreneurial spirit, recently earned Keegan, of all things, an Emmy Award, the highest honor of the Academy of Television Arts and Sciences.

Keegan is co-creator of the animated television series “The Adventures of Young Thomas Edison,” which won the 2008 Mid-Atlantic Emmy Award for Children/Youth/Teen Program or Special after airing on New Jersey Network Public Television. The show teaches creativity and innovation through the scientific method.

“I kept hearing about how science and math standards had been dropping,” Keegan said. “And then I read a report that said if you don’t capture students’ interest in math and science by fifth grade, you’ve lost them for life. I wanted to make an impact by inspiring kids to ask questions and think differently. The series is something that parents have been looking for because it’s completely different.”

Keegan accepted his “dream job” at Notre Dame in February, leaving behind a career that many people might consider the same thing. He served as the executive director of the Edison Innovation Foundation in Newark, N.J., which is committed to educating the next generation of great innovators through Edison and his Invention Factory. Keegan worked alongside his father John, chairman and president of the Charles Edison Fund, from which the foundation was created, and remains a trustee of both the foundation and the fund.

The connection to the Edisons began with Keegan’s father. A 1961 Notre Dame graduate, John Keegan was one of the attorneys who oversaw the estate of Edison’s son Charles, who assisted his father in running the business, as well as serving as secretary of the Navy and governor of New Jersey. He didn’t have any children, so he left all of his money to his estate for historical preservation, medical research and higher education. Currently valued at around $200 million, the fund, incidentally, has a long history of support for science and engineering at Notre Dame.

A 1995 Notre Dame graduate, Keegan earned a master’s degree through the University’s Alliance for Catholic Education (ACE) program, as well as an MBA from the University of Florida. After serving as the assistant fiscal manager for the Diocese of St. Augustine in Jacksonville, Fla., Keegan joined the Edison Innovation Foundation.

“Back in 1998, the board of the Charles Edison Fund felt Thomas Edison’s legacy was not being preserved the way it should be,” Keegan explained. “So, they set up the foundation to concentrate directly on his life and legacy and began a marketing campaign that would license Edison’s name around the world.”

Keegan’s idea for the children’s series and, consequently, its Emmy, has given the marketing campaign a huge boost, and he says the concept took root years before.

“When I was in business school I had a concentration in entrepreneurship and innovation, and that’s when I really started talking to my father about Edison and what he did,” Keegan said. “Besides wanting to combine my two master’s degrees in education and business, that’s when the light bulb really went on for me.” (No pun intended)

Keegan partnered with Randall Rossilli Jr., producer and founder of Nightstand Creations, and in 2006 his idea blossomed into a pilot. The pilot was produced in only nine months, which is unheard of in children’s animation, and, as Keegan admits, “especially for two guys who have never had any producing experience.”

Now, eight months after a “great opportunity presented itself” at Notre Dame, Keegan remains protective of “Young Thomas Edison.” He still reviews all creative content for the show, which is committed to air next fall on participating PBS stations. The pilots already have airing committments in New York, Mississippi and Florida, as well as New Jersey, and there are DVDs of each show, story books and animated music videos.

“It’s surreal,” Keegan said. “Everyone is kind of shocked that a pipe dream of one of their employees could be Emmy-worthy. It’s a nice recognition, but, to me, what really needs to be done is to reintroduce Edison to the next generation of kids to allow them to think the way he thought.”

Although he has “discussed the series with a lot of folks in Hollywood,” Keegan doesn’t want to sell out to someone who won’t look after the initial purpose of the show, and he intends to stay at Notre Dame.

“The Emmy is simply a validation of a concept that I thought would work,” he said. “I’m not planning to be the next Walt Disney. My skill set is more conducive to helping raise monies for Notre Dame.”