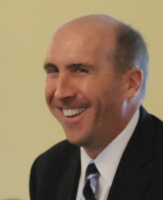 The University of Notre Dame Alumni Association this fall honored DePauw University President Brian W. Casey, an alumnus of the College of Arts and Letters.

“Mr. Casey made quite the impact as a student in South Bend,” the award citation notes. “An elected member of Phi Beta Kappa, the academic honor society that celebrates and advocates excellence in the liberal arts and sciences, Mr. Casey graduated from Notre Dame summa cum laude with degrees in philosophy and economics. Additionally, he received the Economics Award, which is conferred on a student who earns the highest grade point average in that subject. In his ‘spare’ time at Notre Dame, Mr. Casey served as captain of Notre Dame’s varsity swim team and earned the University’s Scholar-Athlete of the Year honor his senior year.”

After graduating from Notre Dame in 1985, Casey received a law degree from Stanford University Law School and a Ph.D. in the history of American civilization from Harvard University. He served as assistant provost at Brown University and associate dean for academic affairs in the Faculty of Arts and Sciences at Harvard before becoming president of DePauw in July 2008.

“I have to admit that I was deeply humbled when I heard I was to receive this award,” Casey says. “Seeing the list of past recipients, I surely did not feel I was worthy. But having accepted the award, I must note how deeply moving the ceremony itself was both because of the excitement of the day and the memories it brought up. Notre Dame was the place that introduced me to great ideas, great thoughts, great writers. … My foundation was built at Notre Dame, and for that I will be forever grateful.”