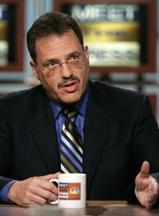 Larry Diamond, a senior fellow at Stanford University’s Hoover Institution, will deliver a lecture titled “Can Iraq Be Stabilized?” at 6p.m. Nov. 27 (Tuesday) in the Hesburgh Center auditorium at the University of Notre Dame.

Diamond will discuss the political implications of the current stalemate in Iraq, and why achieving a national political bargain is vital to stabilizing Iraq and preventing a descent into a much larger and bloodier civil war. In 2004, Diamond served as a senior advisor on governance to the Coalition Provisional Authority in Baghdad.

At Stanford, Diamond is professor by courtesy of political science and sociology and the coordinator of the democracy program of the Center on Democracy, Development, and the Rule of Law within the Freeman Spogli Institute for International Studies. He is founding coeditor of the Journal of Democracy.

He is also co-director of the National Endowment for Democracy’s International Forum for Democratic Studies, which sponsors scholarly research and publications and coordinates an international network of democracy research institutes.

Carr has advised and lectured to the World Bank, United Nations, State Department and other governmental and non-governmental agencies dealing with governance and development. Currently he serves as a member of USAID’s Advisory Committee on Voluntary Foreign Aid.

While at Notre Dame, Diamond also will deliver a lecture titled “The Globalization of Democracy,” at 12:30p.m. Nov. 27 (Tuesday) in C103 Hesburgh Center.

Originally published by Elizabeth Rankin at newsinfo.nd.edu on November 16, 2007.