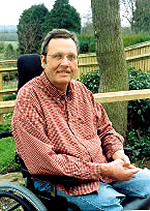 Two screenings of a new film about retired Notre Dame faculty member Gilburt D. Loescher’s survival, suffering and courageous recovery from an Iraqi suicide bombing will be presented this weekend in the Hesburgh Library’s Carey Auditorium.

The film, “Pulled from the Rubble,” directed by Loescher’s daughter, Margaret, will be shown Friday (Nov. 11) at 8p.m. and Sunday (Nov. 13) at 4:30p.m. At both screenings, Margaret Loescher will introduce the film and answer questions.

In August 2003, a suicide bomber driving an explosive-filled cement truck attacked the United Nations headquarters in Baghdad. Loescher, an expert on international relations and refugees was in Baghdad for the “Open Democracy Project,” a humanitarian research organization studying the human costs of war and reconstruction. He was in a meeting with U.N. officials, including UN Special Envoy Sergio Vieira de Mello, during the attack. Vieira de Mello was trapped with Loescher but died before rescue workers could get him out of the rubble. Although terribly injured – including the loss of both legs – Loescher was the only survivor in his section of the building. Twenty-three people were killed in the attack and more than 100 were injured.

Loescher, a professor emeritus of political science and fellow in Notre Dame’s Kellogg Institute for International Studies and Kroc Institute for International Peace Studies, is a 1967 graduate of St. Mary’s College of California. He earned his master’s degree from Monterey Institute of Foreign Studies and doctorate from the London School of Economics and Political Science before joining the Notre Dame faculty in 1975. Loescher has lived in England with his wife and two daughters for years, and commuted back and forth between South Bend and England when he was a professor. Before retiring, he also ran Notre Dame’s London program for a year.

Loescher’s published works include “Refugee Movements and International Security” and “Beyond Charity: International Cooperation and the Global Refugee Problem.” Loescher continues to work as a senior research fellow in the department of politics and international relations and a research associate at the Refugee Studies Centre in Oxford. His most recent project, titled “Protracted Refugee Situations in Africa and Asia,” is intended to develop policies for dealing with chronic refugee problems.

“Pulled from the Rubble,” Margaret Loescher’s first feature-length documentary film, has been shown at Human Rights Watch film festivals in London and New York, as well as at the War Crimes Tribunal in Hague, and at the Geneva headquarters of the U.N. High Commission for Refugees.