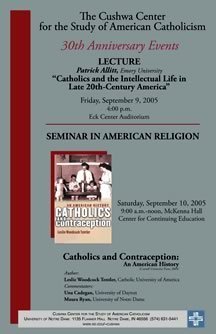 The University of Notre Dame’s Cushwa Center for the Study of American Catholicism will celebrate its 30th anniversary Sept. 9 (Friday) and 10 (Saturday) with a lecture and seminar.

Patrick Allitt of Emory University will give a lecture on “Catholics and the Intellectual Life in Late 20th-Century America” at 4p.m. Sept. 9 in the Eck Center auditorium.

Leslie Woodcock Tentler, professor of history at Catholic University of America, will lead a seminar on her book, “Catholics and Contraception: An American History” at 9 a.m. Sept. 10 in McKenna Hall auditorium. Seminar participants will include Una Cadegan of the University of Dayton and Maura Ryan, associate professor of theology at Notre Dame.

The Cushwa Center for the Study of American Catholicism, directed by Timothy Matovina, associate professor of theology, is widely recognized as the leading center for the historical study of Catholicism in the United States. Its seminars, conferences, and research projects have attracted the admiration and enthusiastic participation of historians, theologians, sociologists and other scholars. In addition to generating numerous academic and popular publications, the center provides resources for Church leaders and pastoral workers and for journalists interested in Catholicism.

The center began operations in 1975 under the direction of Jay P. Dolan, now professor emeritus of history. In 1981, the Charles and Margaret Hall Cushwa family of Youngstown, Ohio, provided the center with a major endowment. Charles B. Cushwa Jr., a 1931 graduate of Notre Dame, loved history and American Catholicism. His wife, Margaret Hall Cushwa, was a graduate of Saint Mary’s College and a community leader and patron of Catholic cultural and charitable organizations in Youngstown.

Contact: Paula Brach, senior administrative assistant at the Cushwa Center, at 574-631-5441 or Brach.9@nd.edu