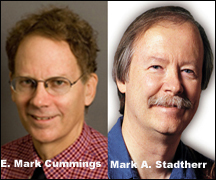 E. Mark Cummings, Notre Dame Professor of Psychology, and Mark A. Stadtherr, professor of chemical engineering, will be recognized as the University of Notre Dame’s 2008 James A. Burns, C.S.C., Graduate School Award winners during the school’s Commencement ceremony Saturday (May 17) at 10 a.m. in the Joyce Center.

The award is given annually to a faculty member or members for distinction in graduate teaching or other exemplary contributions to graduate education.

Cummings’s research interests concern children, marriages and families. He has especially focused on the effects of everyday forms of marital conflict on children’s functioning and adjustment, including understanding how parents might better handle their differences for the sake of their marriage and the sake of their children.

A member of the Notre Dame faculty since 1996, Cummings is the author of “Children and Marital Conflict” and “Developmental Psychopathology and Family Process: Theory, Research and Clinical Applications.”

His Burns Award citation notes: `Revered by graduate students because of his exemplary student mentoring and training, one of this prolific researcher’s many strengths is the ability to consistently involve his graduate students in every aspect of the research process — from developing longitudinal studies to performing actual research to involving them in research publications and presentations. They go on to publish in top journals and to secure placement in prestigious academic and clinical positions."

The focus of Stadtherr’s research is primarily on the development and application of strategies for reliable engineering computing, with particular interests in global optimization, validated solution of dynamic systems, and computation of phase behavior. Energy research in his group involves the modeling of processes for using ionic liquids and CO2 for improved energy efficiency.

One example of Stadtherr’s research is the modeling and computation of phase behavior associated with using ionic liquids for more energy efficient absorption refrigeration from waste heat. He joined the Notre Dame faculty in 1996.

Stadtherr’s Burns Award citation notes: “In numerous tributes to him, this faculty member’s graduate students have praised the guidance and mentoring he provides as they progress efficiently to their degrees while, at the same time, being given freedom to mature intellectually. Beyond his own graduate students, he has advanced the work of all graduate students in his department in his role as Director of Graduate Studies for the past 12 years.”

Father Burns was the first Notre Dame president with an advanced degree, a doctorate from Catholic University, and he was the leading reformer of Catholic education in the United States in the first quarter of the 20th century. One of his most significant accomplishments was to raise Notre Dame’s academic standards by recruiting faculty with doctoral degrees.