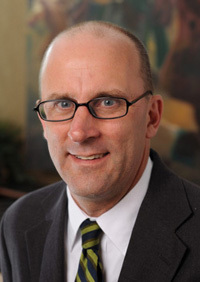 When John T. McGreevy was appointed I.A. O’Shaughnessy Dean of the University of Notre Dame’s College of Arts and Letters last year, he said “Notre Dame’s effort to at once become a preeminent research university, enhance an already strong reputation in undergraduate education and nurture a distinct religious identity is one of the most important experiments in American higher education, and I look forward to assisting this project from a new vantage point.”

McGreevy continues to make good on that promise, implementing a number of changes this fall that will help the college create a more intense and sophisticated undergraduate experience.

As one of his initial goals, McGreevy is working with the faculty to triple in three years the percentage of Arts and Letters students who complete a senior thesis. Defined as a year-long original research project, a senior thesis can be a written text, artwork or a performance or production, but in every case includes working one-on-one with a faculty member or graduate student who is in residence throughout the process. It’s an aggressive goal, and one about which he’s most passionate.

“We want to create a senior thesis culture in which students are encouraged to research complex problems, learn something in the process that no one else has ever learned before and make contributions to the world of scholarship,” McGreevy explained. “That’s an ambitious goal, but one that can transform the student experience.”

Last year, a committee led by Stuart Greene, associate dean for undergraduate studies, began examining how to enrich the thesis programs in Arts and Letters departments. It established a common due date in March, to be followed by a “Senior Thesis Day” reception. But more importantly, each department now is encouraged to develop a multi-year support system for students doing a thesis or creative project. Departments with the most successful models are sharing best practices.

“I see this initiative less as a numerical quota and more as a challenge for departments to innovate,” said Joshua Kaplan, director of undergraduate studies in the Department of Political Science. “For most students, the senior thesis represents a departure from the kind of writing they do in their courses. The University encourages undergraduate research, but students need to learn how research is actually done before they undertake a project of their own.”

Research grants and study abroad, an experience shared by some 59 percent of Notre Dame undergraduate students, will be more heavily emphasized as launching points for a senior thesis. McGreevy explains that, for example, a student studying in London for a semester might uncover an idea there for a research topic, apply for an Undergraduate Research Opportunity Program (UROP) grant and return to London over the summer, strategically planning toward a thesis.

Kaplan recalls a senior thesis written by former political science and history double major Allyson Connolly that was especially notable because it linked her two majors, drew on her experience interning in Washington, D.C., and proved challenging, but ultimately changed the way she viewed herself as a student.

“I can say without a doubt that it was the highlight of my academic experience at Notre Dame,” Connolly said.

Titled “What Kind of Compromise Was the Missouri Compromise,” Connolly’s thesis examined the legislative history of the 1820 agreement between pro-slavery and anti-slavery factions in the Congress that involved primarily the regulation of slavery in the western territories. She found that the legislation changed very little from proposal to passage, indicating that it was not a compromise for which both sides met in the middle.

“Allyson learned in her political science courses that there is more than one form of compromise,” Kaplan explained. “And she wanted to see if this was an example of the theorem that says that two sides with irreconcilable differences can reach consensus if the goal of each is to avoid its worst option, rather than achieve its top preference. For both the North and South, the worst option was for the other to gain control of Congress. The Missouri Compromise, she concluded, reflected an imperfect but stable status quo.”

Connolly’s thesis, which featured both analytical and historical components, was fueled by her disappointment during her Washington internship when she witnessed the political parties’ refusal to cooperate on legislation with considerable consensus simply because neither wanted the other to get credit for success.

“The senior thesis process provided me with the opportunity to step up academically,” Connolly said. “There was no clear path for me to take in order to succeed, but I knew I had to go beyond even the higher level writing seminars I had taken. It challenged me in every way and required me to utilize every skill I had learned thus far at Notre Dame.”

McGreevy says he couldn’t have said it better himself, and he intends to show even more students the benefits of such a challenge.

“Thinking through intellectual issues and completing an independent project are invaluable experiences for our students because they are better prepared for the workforce with skills that will last a lifetime, whether in the business world, graduate or professional school or community service,” he said. “For graduate school, the experience really is indispensable. Many programs won’t consider anyone who hasn’t done a senior thesis.”

Originally published at newsinfo.nd.edu on December 15, 2009.