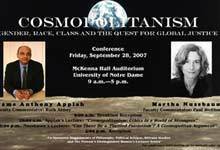 Kwame Anthony Appiah from Princeton University and Martha C. Nussbaum from the University of Chicago Law School will serve as keynote speakers for a one-day conference titled “Cosmopolitanism: Gender, Race, Class and the Quest for Global Justice” on Sept. 28 (Friday) in the auditorium of McKenna Hall at the University of Notre Dame.

Sponsored by the University’s Gender Studies Program, the conference will take place from 9 a.m. to 5p.m. and is open to the public.

Cosmopolitanism is a philosophical school of thought that traces its roots to ancient Stoicism and the Enlightenment philosopher Immanuel Kant. Cosmopolitan thinkers are concerned with issues of global peace and justice and question to what extent human beings have obligations to help other living creatures, regardless of nationality, gender, race, class, disability, species or other identity traits.

Dubbed the “postmodern Socrates,” Appiah will deliver a 10 a.m. lecture titled “Cosmopolitanism: Ethics in a World of Strangers” based on his book, which won the Council on Foreign Relations’ Arthur Ross Book Award. Responding to the talk will be Ruth Abbey, associate professor of political science at Notre Dame.

Appiah, the Rockefeller University Professor of Philosophy at Princeton, teaches philosophy and African and African-American Studies. His research focuses on how individuals construct themselves in dialogue with social circumstance, both private and public, past and present. He believes there is an urgent need for an “ethical universe” that transcends social fragmentation and bridges our differences.

Nussbaum, the Ernst Freund Distinguished Service Professor of Law and Ethics at the University of Chicago, will deliver a 2p.m. lecture titled “Can There Be a `Purified Patriotism’? A Cosmopolitan Argument.” The talk is based on her book “Frontiers of Justice: Disability, Nationality, Species Membership.” Paul Weithman, professor of philosophy at Notre Dame, will serve as the respondent.

Nussbaum has taught at Harvard, Brown and Oxford Universities and served as a research advisor at the World Institute for Development Economics Research in Helsinki, a part of the United Nations University. She has chaired the Committee on International Cooperation and Committee on the Status of Women of the American Philosophical Association, and currently chairs the organization’s new Committee for Public Philosophy.

The conference is co-sponsored by the Office of the Dean of the College of Arts And Letters, Provost’s Distinguished Women’s Lecturer Series, Glynn Family Honors Program, and the departments of philosophy, political science and Africana studies.