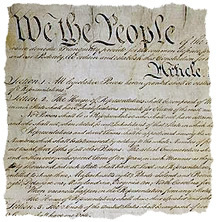 A University of Notre Dame academic course on the U.S. Constitution will be open to the public Sept. 19 (Tuesday) at 9:30 a.m. in Room 131 DeBartolo Hall in observance of Constitution Day.

Because the official date of Constitution Day is Sept. 17, which falls on a Sunday this year, Notre Dame joins other institutions nationwide in celebrating the event later in the week.

The course, “Comparative Constitutional Law,” is taught by Donald P. Kommers, Joseph and Elizabeth Robbie Professor of Political Science and professor of law at the Notre Dame. A member of the Notre Dame faculty since 1963, Kommers is one of the nation’s foremost scholars of the Constitution and the author of numerous books, book chapters and articles on that subject as well as on German and American politics and law.

Constitution Day is annually celebrated in the United States on Sept. 17, the day in 1787 that the 39 delegates to the Constitutional Convention met for the last time in Independence Hall in Philadelphia to sign the document they had created.

Originally published by Michael O. Garvey at newsinfo.nd.edu on September 14, 2006.