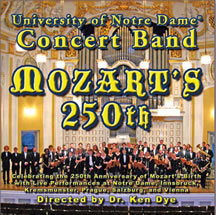 The CD features a wide variety of music including “Fanfare for the Vienna Philharmonic” by Johann Strauss, “On an American Spiritual” by David Holsinger, “Irish Celebration” arranged by Kenneth Dye, director of bands, and “Il Re Pastore,” “Ave Verum Corpus,” and “Gloria” from the “Coronation Mass,” all by Mozart.

All pieces were recorded live in concert sites that included the Great Hall of the Mozarteum in Salzburg, Austria; Obecni Dum in Prague, Czech Republic; and Votiv Kirche in Vienna, Austria.

Founded in 1845, the Notre Dame Concert Band is composed of 80 musicians, most of whom are not music majors at the University. It annually performs on tour throughout the United States and around the world.

Dye, who came to Notre Dame in 1998, previously directed the bands at Rice University for 17 years, served 14 years as conductor of the Houston Concert Band, and served as arranger and composer for the opening ceremonies of the 2000 Olympic Games in Sydney, Australia.