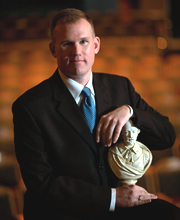 Jay Skelton’s “aha moment” struck in his mid-20s while he was working in marketing and publicity for Boston’s Huntington Theatre Company.

“I would go to rehearsals and watch the actors and listen to the directors so I could get more information about the play in order to sell it better,” says Skelton, Notre Dame’s new artistic director of Summer Shakespeare and assistant professor of acting and directing in the Department of Film, Television and Theatre.

“At one rehearsal,” he recalls, “I was about 5 feet away from a woman playing the servant Paulina in `A Winter’s Tale,’ and she was taking the king, Leontes, to task for unjustly banishing his wife. I remember that as a very transformative moment in my life — nothing else existed for me at that moment except the ferocity with which she was screaming at the king. I distinctly remember the feeling of `I want to be a part of creating that, I don’t want to just sell it.’”

Fast-forward 15 years: Currently, Skelton is so much a part of “it” at Notre Dame that he not only is directing, but he’s also teaching, managing and yes, “creating that” in his new role.

After earning a master of fine arts degree in directing in 1993 from DePaul University, Skelton worked as a freelance director – writing, directing and/or producing more than 80 shows in the Boston and Chicago areas. He also has worked in administrative roles for Blue Man Group, the Goodman Theatre and Jane Alderman Casting.

Skelton brings this package of skills as well as enthusiasm for theater in general and Shakespeare in particular to his position, mindful of potential growing pains that many successful programs experience.

“Summer Shakespeare is an organization that has grown really fast in a short amount of time,” he said. “I think my job is to thicken the roots of the organization over the next couple of years in order to more fully support its growth … strengthen our ties with the community, within the University, collaborate with community and arts organizations, and make Summer Shakespeare not just a special event that takes place every summer, but an important part of the University that continues its mission year-round.”

Summer Shakespeare at Notre Dame is comprised of three distinct production experiences: The Young Company , formed by Saint Mary’s College and Notre Dame students who perform their shows at varied venues in the community; *ShakeScenes, * 15-minute scenes performed outdoors by area schoolchildren and community acting groups; and the *main stage production, * the professional production of one of Shakespeare’s plays.

“I believe the attention we’ve lavished in the past on the main stage production can be shared with the other two aspects of the program so our audiences can understand and appreciate Shakespeare in whatever form they wish to choose — hopefully all of them,” Skelton said.

Notre Dame is a fitting American home for excellence in Shakespeare studies, Skelton believes, observing that the “Catholic faith is based, in part, on compassion toward your fellow man, and I find Shakespeare to be the most compassionate playwright in the world. He is unmatched in exploring the full measure of humanity and it takes a very compassionate artist to do that.”

Originally published by Susan Guibert at newsinfo.nd.edu on May 11, 2006.