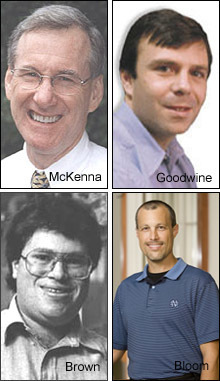 The undergraduate colleges of the University of Notre Dame have selected their outstanding teachers for the 2007-08 academic year.

In the College of Arts and Letters , James J. McKenna, Rev. Edmund P. Joyce, C.S.C., Professor of Anthropology, has been named recipient of the Sheedy Award for Excellence in Teaching.

Endowed by a anonymous donor, the award has been given annually since 1970 in memory of Rev. Charles E. Sheedy, C.S.C., former dean of the college.

McKenna, who directs the Mother-Baby Behavioral Sleep Laboratory, is regarded as the world’s foremost authority on mother-infant co-sleeping and breastfeeding issues. His research focuses on the relationship between sleeping arrangements, feeding methods (especially breastfeeding) and risk factors for sudden infant death syndrome (SIDS). He joined the Notre Dame faculty in 1997.

In the College of Engineering , J. William Goodwine Jr., associate professor of aerospace and mechanical engineering, has been named Outstanding Teacher of the Year.

Goodwine’s research focuses on geometric nonlinear control theory with robotic applications and engineering mechanics and dynamics. His work is devoted to such areas as stratified control systems, unstable rolling dynamics and shimmy and vision-based robotic control. He joined the Notre Dame faculty in 1998.

In the College of Science , Seth N. Brown, associate professor of chemistry and biochemistry, has been chosen as the recipient of the Shilts/Leonard Teaching Award.

Brown joined the Notre Dame faculty in 1996 and specializes in stereoelectronic effects in atom transfer reactions and catalytic oxygenation reactions. He was the recipient of the Camille and Henry Dreyfus New Faculty Award for 1996 and the 1998 DuPont Young Faculty Award, and the 2000 Union Carbide Innovation Recognition Program.

Established in 1993, the Shilts/Leonard Award recognizes outstanding teaching in memory of Rev. James L. Shilts, C.S.C., a longtime Notre Dame astronomy and astrophysics professor who died in 1982. The award was endowed by Eugene T. Leonard, a surgeon and 1940 alumnus of the University.

In the Mendoza College of Business , Matthew Bloom, associate professor of management, has been selected to receive the college’s undergraduate teaching award, which is sponsored by the British oil company BP. The recipient is chosen each year by the graduating class.

Bloom joined the Notre Dame faculty in 1996 and specializes in innovation, creativity, employee motivation, intrinsic motivation and employee engagement. He focuses on the science of happiness and how it relates to work and he often partners with organizations, including heath care systems, to carry out his research.