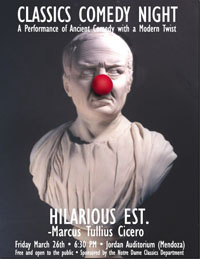 For most Notre Dame students, a typical Friday afternoon in the spring might include a little Frisbee or pick-up basketball, maybe a movie, certainly dinner with friends.

But something a little more atypical attracted more than 200 students to gather on March 26 of this year: 50 young classicists presented “A Night of Greek and Roman Comedy” to a capacity crowd of their fellow students.

Doug Schuda, a senior philosophy major with a supplementary major in Greek and Roman civilization, was the choregos (the equivalent of a modern-day producer or director) for one of the comedies, an updated production of Aristophanes’ The Clouds.

“The original version of Aristophanes’ Clouds was written in the late fifth-century B.C. for one of the yearly Athenian festivals, as part of the contest for best comedy,” Schuda says. "It placed third [out of three] the year it was performed. In fact, it was received so badly that the audience didn’t even stick around for the entire performance. Aristophanes had to re-write it to finally get it completely performed.”

Just as Aristophanes did, the Classics students had to reinvent The Clouds to catch the interest of their audience.

“The version we performed was a modern adaptation that followed the core characteristics of Aristophanes’ work,” Schuda explains. “The basic plot was the same: Strepsiades is in debt and in trouble with the collectors. He goes to the rather eccentric Socrates for help but is unable to learn how to get out of the trouble himself, so Socrates sends for Strepsiades’ son to teach him instead. Ultimately, Strepsiades is left in a worse position than before.”

To appeal to their audience, Schuda and his team added new materials and references, including credit-card debt, characters called “Life Coach” and “Lawyer” (to replace what Aristophanes called “Good Argument” and “Bad Argument”), and the mention of popular student haunts such as Finnegan’s and Club 23.

“Aristophanes’ play ends with Strepsiades burning down Socrates’ ‘Thinkery’ in a rage,” Schuda says. “We decided to simply end ours by having Strepsiades led off to a nursing home.”

The entire evening’s humorous and at times raunchy blend of ancient and modern Western culture helped bring to life for students Aristophanes’ satire about the intellectual fashions of classical Athens.

“Actually staging a drama provides valuable insights into the text,” says Tadeusz Mazurek, assistant professor of classics and one of the faculty who helped with the performance. “When we stage a play, we are forced to consider important questions about character development and to notice nuances of humor and embedded stage directions.

“After this experience,” he notes, “students understand much better what made an ancient audience laugh, including the effect of physical humor, not just intellectual wit. Ultimately, they learn to appreciate how ancient Greco-Roman comedy has influenced comic playwrights from Shakespeare to the Marx Brothers and even the Three Stooges.”

In addition to the performance of The Clouds, the event also included the student’s version of Plautus’ play The Brothers Menaechmi.

The night of comedy was introduced by professor Edith Hall, a Provost’s Distinguished Women’s Lecturer, who commented on the two plays adapted by the students and shared her experiences staging ancient dramas. Hall is a scholar of classics and cultural history, and holds a joint Research Chair in Classics and Drama at Royal Holloway, University of London, where she directs the Centre for the Reception of Greece and Rome. She also co-directs a research project at Oxford University and is chairman of the Gilbert Murray Trust.