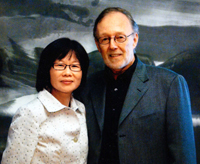 The book, Three Sisters, was the fifth novel the two Department of East Asian Languages and Cultures professors translated together and the second to win a prize. Their first project, the Taiwanese novel Notes of a Desolate Man, won the American Literary Translators Association translation of the year award in 1999—an award for the best book translation into English from any language in the world.

Lin, a native Chinese speaker born in Taiwan, and Goldblatt, a native English speaker, have been teaming up on translation projects for the past 14 years and say that converting a work of fiction from one language to another is a delicate task.

Accurately conveying the meaning and style of the original work requires not just fluency in both languages and cultures but the sensibility of a creative writer, Goldblatt says.

“It’s never a word for word conversion—it just can’t be,” he says. “I like to say that we who translate from Chinese into English have a requirement to be more creative, because the languages are so disparate.”

For example, Goldblatt explains, Chinese uses only about a third of the vocabulary that English does, so there is a lot of repetition in the original text that readers of a translation might find monotonous. Chinese writers also tend to avoid pronouns, typically using a person’s full name every time that character is mentioned in the text.

“In Chinese, the sentence structure is pretty much in a declarative style,” adds Lin. “And the translators need to be creative. For instance, it’s not uncommon to have sentences like these: ‘He gets up. He goes to the door. He opens the door and he looks out.’ It’s a faithful translation but very boring. In order for it not to turn the reader off, you have to say something creative, like ‘Getting up from his chair, he walked to the door and …’”

Those are the kinds of judgments a translator has to make, she says, considering every word and every line of text. “It’s not just about letting the readers know what happened in this novel but helping them appreciate the book on a different level.”

Man Group, the same company that sponsors the prestigious Man Booker Prize in the United Kingdom, founded the Man Asian Literary Prize in 2007. The prize is awarded annually to the best novel by an Asian writer, either written in English or translated into English, and published during the previous calendar year.

A research professor of Chinese, Goldblatt has translated three of the four winning books since the Man Asian Literary prize was first established, including Su Tong’s The Boat to Redemption in 2009 and Jiang Rong’s Wolf Totem in 2007. He is the recipient of two translation fellowships from the National Endowment for the Arts, the founding editor of the scholarly journal Modern Chinese Literature, and author and editor of several books on the subject.

Lin is an associate professor of modern and contemporary Chinese literature, film, and culture. A winner of the Liang Shih–chiu Literary Translation Prize, she was appointed as the College of Arts and Letters Executive Fellow in 2008-2009. Her recent publications include Representing Atrocity: The 2/28 Incident and White Terror in Fiction and Film and Push Open the Door: Poetry from Contemporary China, a co-edited bi-lingual anthology sponsored by the National Endowment for the Arts.

Translators and translations play a critical role in the humanities, Lin says, one that she particularly notices through her work in the College of Arts and Letters.

“Our students rely so much upon translation to appreciate literature from another country,” she says. “Not everyone is going to learn 10 languages to be able to read literature from these countries, so that is probably the first and foremost role a translator plays.”