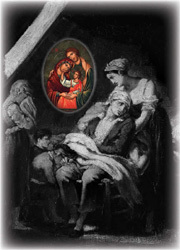 Pope Benedict XVI, no less than his predecessor, Pope John Paul II, has had much to say about the plight of the human family in contemporary culture.

In an address earlier this year, Pope Benedict described the family as “an intimate union of life and love based on marriage between a man and a woman” which is “the primary place of ‘humanization’ for the person and society” and a “cradle of life and love.”

The pope’s observations challenge the present age, according to David Solomon, W.P. and H.B. White Director of Notre Dame’s Center for Ethics and Culture.

“It is widely accepted that the modern family is suffering a crisis on all sorts of dimensions—economic, legal, political, demographic, biological, structural, cultural and metaphysical,” Solomon said. “It’s no accident that recent dystopian literature and film paint a bleak picture of the family, from such films as ‘American Beauty’ to such novels as P.D. James’ ‘Children of Men.’ This seems like a particularly appropriate time to think about and discuss the situation of the family.”

According to Solomon, the center’s ninth annual fall conference, “The Family: Searching for Fairest Love,” to be held at Notre Dame from Nov. 6 to Nov. 8 (Thursday to Saturday), will gather together scholars to examine the family, its origins, its status in society and under civil law, the challenges it faces in the modern world and to offer hope for the future of the family.

The conference title is taken from Pope John Paul II’s 1994 “Letter to Families,” in which he wrote that “only the truth will prepare you for a love which can be called ‘fairest love.’ The contemporary family, like families in every age, is searching for fairest love.”

John Finnis, Biolchini Family Professor of Law at Notre Dame, will give a lecture “On Retranslating Humanae Vitae” at 7:30p.m. Thursday (Nov. 6) in the auditorium of McKenna Hall.

Elizabeth R. Schiltz, professor of law in the University of St. Thomas School of Law, will give a lecture, “Does Sarah + John = 3? The History and Future of Complementarity in Catholic Feminism” at 7:30p.m. Friday (Nov. 7) in the auditorium McKenna Hall.

Other speakers at the conference will include Helen Alvar of the George Mason University School of Law; David Lyle Jeffrey of Baylor University; William Saunders, director of the Family Research Council’s Center for Human Life and Bioethics; Monsignor Charles Brown of the Vatican Congregation for the Doctrine of the Faith; and Gilbert Meilaender, professor of theology and Phyllis & Richard Duesenberg Chair in Christian Ethics at Valparaiso University.

More information on “The Family: Searching for Fairest Love” is available on the conference Web site at http://ethicscenter.nd.edu

Originally published by Michael O. Garvey at newsinfo.nd.edu on November 03, 2008.