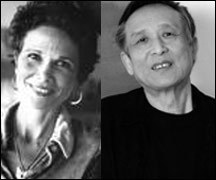 The acclaimed authors Julia Alvarez and Gao Xingjian will visit the University of Notre Dame from Sept. 10 to 12 to participate in a series of cross-cultural, multi-disciplinary events.

Born in China and presently residing in Paris, Gao deftly navigates Eastern and Western philosophical and artistic traditions through a broad array of media. The 2000 Nobel Prize Laureate in Literature, Gao is best known as a poet, novelist, playwright, screenwriter and librettist. He also is a painter and filmmaker and that work also will be on display and presented while he is at Notre Dame.

Alvarez has written 16 critically acclaimed books about her early years in the Dominican Republic and her life in the United States, including “How the Garca Girls Lost Their Accents” and “In the Time of the Butterflies,” which was made into a movie produced by and starring Salma Hayek, with Marc Anthony and Edward James Olmos. She is the writer-in-residence at Middlebury College.

Alvarez and Gao will appear jointly and in individual events over three days, including a literary conversation between the two. Other events are the premiere of an exhibition of new paintings by Gao at the Snite Museum of Art, a lecture and book signing by Alvarez, a lecture by Gao literary translator Mabel Lee, a screening of Gao’s film “La Silhouette Sinon l’Ombre,” as well as the performance of a montage of scenes from Gao’s plays, and an international scholarly panel presentation on his drama.

The event, focusing on artists living and working in societies very different from their cultural homelands, is made possible by a generous gift from Notre Dame graduateRobert E. O’Grady and his wife, Beverly, an alumna of Saint Mary’s College.

“Notre Dame is honored to host Julia Alvarez and Gao Xingjian, two artists of exceptional talent, extraordinary accomplishment, and international renown,” said Thomas G. Burish, provost of the University. “Their joint presence, which is a first for a university setting, will enrich our campus community in multiple ways. We are grateful to them and to Mr. and Mrs. O’Grady, who have worked hard to make their visit possible.”

Specific dates, times and venues for the various presentations will be announced this summer.

Originally published by Dennis Brown at newsinfo.nd.edu on May 14, 2007.