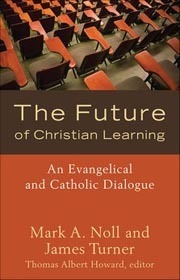 One thing upon which both Catholics and evangelical Christians could sadly agree was mentioned early in a famous joint statement published almost 15 years ago.

“The two communities in world Christianity that are most evangelistically assertive and most rapidly growing are evangelicals and Catholics,” said the authors of “Evangelicals & Catholics Together: The Christian Mission in the Third Millennium.”

“In many parts of the world,” they continued, “the relationship between these communities is marked more by conflict than by cooperation, more by animosity than by love, more by suspicion than by trust, more by propaganda and ignorance than by respect for the truth.”

If that relationship has taken a more agreeable turn since 1994, it owes much to the efforts of such scholars as the University of Notre Dame’s James Turner, Rev. John J. Cavanaugh, C.S.C., Professor of the Humanities, and Mark A. Noll, Francis A. McAnaney Professor of History.

Turner, a Catholic, and Noll, an evangelical, have written a volume of essays, “The Future of Christian Learning: An Evangelical and Catholic Dialogue,” edited by Thomas Albert Howard and recently published by Brazos Press.

Drawing from their respective traditions of faith, the two authors consider the strengths and weaknesses in Christian learning in both communities and suggest what they may have to offer to and learn from each other.

Noll has suggested that such candid and charitable dialogues as these are able to flourish at Notre Dame, among professors and students alike, because it is a Catholic university which welcomes scholars and students of other traditions and faiths.

Francis J. Beckwith, professor of philosophy and church-state studies at Baylor University, has praised the new book for its “bold and ambitious vision, one that embodies what should be an uncontroversial premise: scholarship and teaching at a Christian institution of higher learning ought to take seriously the philosophical tapestry of ideas, principles, and beliefs on which the Christian faith rests and from which it offers an account of what is good, true, and beautiful. If evangelicals and Catholics, in true cooperation, can offer this vision to the secular academy, perhaps this will plant the seeds that may result in the ultimate fulfillment of Christ’s prayer, `Holy Father, keep them in thy name, which thou hast given me, that they may be one, even as we are one.’”

Joshua Hochshild, professor of philosophy at Mount St. Mary’s University, said that the authors have provided “generous and critical evaluations of the roles of Catholicism and Protestantism in American education. Living proof of what Catholics and Protestants can learn from each other, Noll and Turner are both personally and professionally invested in their subject. Their contributions – and Thomas Albert Howard’s insightful introductory essay – not only explore, but model, the state of `Christian learning.’”

One of the nation’s foremost scholars of American religious and cultural history, Noll joined the Notre Dame faculty in 2006. A prominent participant in dialogues between evangelical and Catholic scholars, he is the author of numerous books, including “The Scandal of the Evangelical Mind”; “The Rise of Evangelicalism: The Age of Edwards, Whitfield, and the Wesleys”; “America’s God: From Jonathan Edwards to Abraham Lincoln”; and “The Civil War as a Theological Crisis.”

A member of the Notre Dame faculty since 1995, Turner teaches in both the history department and the doctoral program in history and philosophy of science. His other books include “Reckoning with the Beast: Animals, Pain, and Humanity in the Victorian Mind”; “Without God, Without Creed: The Origins of Unbelief in America”; “The Liberal Education of Charles Eliot Norton”; “The Sacred and the Secular University”; and “Language, Religion, Knowledge.”

Originally published by Michael O. Garvey at newsinfo.nd.edu on July 24, 2008.