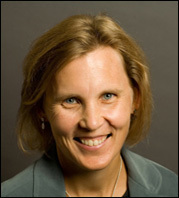 At one time or another, we’ve all been lost and sought out a relative, friend or gas station attendant for directions. But while “Take Cleveland west and turn on Lilac, just before the bank” seems simple enough, there’s a lot that goes into that advice.

Laura Carlson, associate professor of psychology at Notre Dame, says spatial cognition — the way we represent and remember objects and their locations — is intricately tied to other cognitive processes, like attention, memory and language.

“If you’re walking on a path and there’s a landmark right in front of you, it’s pretty easy to say `Proceed until you get to the fountain.’ But if there’s a landmark that would be sort of diagonally to you instead, that’s a more difficult relation to describe . . . So I may forego that landmark altogether because the other one is much easier to express.”

One way Carlson, who is assisted in her lab by both graduate and undergraduate students, studies spatial cognition is by doing experiments in which participants are asked to describe an object’s location on a computer screen, in a photo or on a table.

Say the object is a set of keys, and it’s placed on a black table with several black objects as well as a red stapler, the idea being that the stapler stands out much like a notable landmark would. In what Carlson describes as a baseline configuration, the keys are set close to this “landmark,” typically leading people to describe their location relative to it, as in “The keys are in front of the stapler.”

But what happens when the keys are moved closer to one of the black objects?

“It turns out that participants pick [the black object] overwhelmingly,” Carlson says. Further, when the keys are diagonal to both the stapler and another object, the stapler is not selected significantly more often. This pattern of data suggests that reference objects are chosen more for their proximity to items of interest than their defining physical characteristics.

Carlson also explores this process through more natural interactions, having one of her students call out “Can you tell me where my keys are?” and seeing how the participant, who thinks the experiment hasn’t started, responds. The results have been consistent with the more-controlled experimental tasks, even when the experimenter uses the stapler before leaving the room, thereby drawing the participant’s attention to it.

“All the claims in the literature are that you pick a landmark that is really easy to find, or it’s presumed that the person you’re speaking to knows where it is and can find it,” Carlson says, making her results “somewhat surprising.”

The next step is to see if these findings translate to a larger environment. In a related experiment, participants fill out packets in which they give directions from one campus spot to another. They’re also asked to rate the frequency with which they use certain buildings and how easy several landmarks, such as Notre Dame Stadium, are to imagine visually. Carlson plans to look at how often buildings participants pay the most attention to (i.e., those they visit most) and the ones that are particularly notable (the easiest to imagine) show up in their directions.

“If you want to generalize from [the lab] data,” Carlson says, “the prediction would be that participants will figure out a path first based on spatial relations that are easy to express, then they will pick out landmarks that fall along the path.”

Originally published by Ted Fox at newsinfo.nd.edu on September 26, 2007.