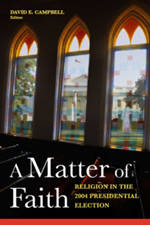 The role of religion in the 2004 presidential election is the subject of a new book edited by David E. Campbell, John Cardinal O’Hara, C.S.C., Associate Professor of Political Science at the University of Notre Dame.

Published by Brookings Institution Press, “A Matter of Faith: Religion in the 2004 Presidential Election” evaluates the claim that moral values were decisive in the contest.

With contributions from 17 experts on religion and politics, including Notre Dame professor emeritus of political science David C. Leege, the book points to exit polls and a strong turnout among evangelical voters as evidence that faith-based values decided the election. Also included are analyses of the strategies used to mobilize religious conservatives, what the 2004 results might mean for future election cycles, and the voting behavior of groups such as evangelicals, African-Americans and the understudied religious left.

Campbell, who earned his doctorate from Harvard University, joined the Notre Dame faculty in 2002. A fellow of the Institute for Educational Initiatives, he is the author of “Why We Vote: How Schools and Communities Shape Our Civic Life” and co-author of “The Education Gap: Vouchers and Urban Schools” and “Democracy at Risk: How Political Choices Have Undermined Citizenship and What We Can Do About It.”

Originally published by Kyle Chamberlin at newsinfo.nd.edu on May 15, 2007.