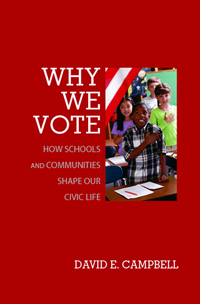 The role of communities in shaping people’s political engagement and the importance of schools in fostering civic norms are the focus of a new book by David E. Campbell, a University of Notre Dame political scientist who specializes in political participation.

Published by Princeton University Press, “Why We Vote: How Schools and Communities Shape our Civic Life” argues that a strong sense of civic duty springs not only from one’s current social environment, but also from one’s early influences, particularly adolescent experience, underscoring the importance of American high schools’ efforts to enhance young people’s sense of civic responsibility. The book demonstrates how being raised and socialized in a community with strong civic norms leads people to be civically engaged in adulthood, resulting in a participatory payoff for years to come.

“This book provides the first solid, generalizable evidence of the influence of an adolescent’s surroundings on adult political behavior,” said Richard Niemi, professor of political science at the University of Rochester. “It offers a significant contribution to the study of voter turnout by showing how citizen duty is a factor in predicting political participation.”

Campbell, the co-author of “Democracy at Risk: How Political ChoicesUndermine Citizen Participation,” and “The Education Gap: Vouchers and Urban Schools,” earned his master’s and doctoral degrees from Harvard University. His other areas of specialty include American politics, religion and politics, and educational policy.

Originally published by Susan Guibert at newsinfo.nd.edu on August 29, 2006.