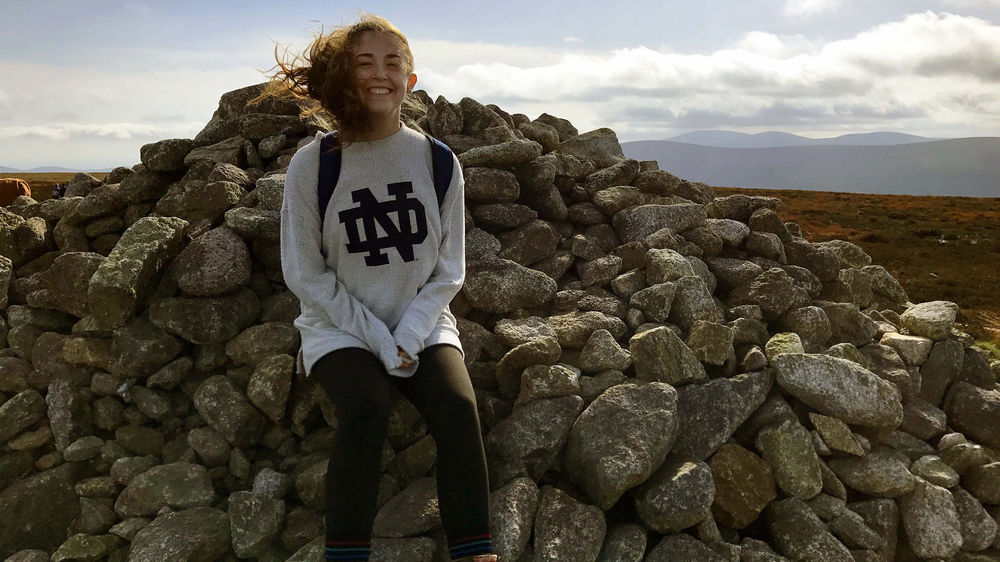 When Rosie Giglia ’17 decided to study Irish language and literature, she opened a world of possibilities that ultimately set her on her post-graduation path.

A neuroscience and behavior major, Giglia traveled to Ireland four separate times as an undergraduate — once for a semester at University College Dublin through the Dublin Global Gateway, and three times for Summer Language Abroad programs at Oideas Gael in County Donegal.

After graduating with a minor in Irish, she was awarded a Naughton Fellowship to complete a master’s degree in neuroscience at Trinity College Dublin. She now works as a research assistant in the neurology department at Trinity, focusing on motor neuron disease.

As she continues to chart her course in Dublin, Giglia relies on the education in the Irish language and culture she received at Notre Dame.

“Taking classes in the Irish department gave me a framework for understanding the Ireland that I experience now,” she said. “So even if I don’t need a specific fact to go about my day-to-day life, it’s nice to be able to understand where people are coming from.”

“Taking classes in the Irish department gave me a framework for understanding the Ireland that I experience now. So even if I don’t need a specific fact to go about my day-to-day life, it’s nice to be able to understand where people are coming from.”

Giglia, a Cincinnati native, knew she wanted to take Irish as her foreign language requirement at Notre Dame, but she didn’t initially plan on adding a minor.

When she started taking classes in the department, she discovered a welcoming environment with dedicated faculty and small class sizes perfect for conversations and one-on-one practice.

“You could tell the professors really enjoyed what they were teaching and were very willing to put in their own time to share what was either their native language or one very important to them,” she said. “You could see their passion for it.”

Giglia first traveled to Ireland the summer after her first year for three weeks of immersive Irish language courses and activities such as lectures, hikes, and “ceilis” — social events that feature traditional music, dancing, and storytelling.

That initial trip inspired her to study in Dublin for a full semester in the spring of her junior year. While there, she took a variety of neuroscience classes and an Irish language course at UCD, along with an Irish history class at the Dublin Global Gateway.

She also embraced the Dublin program’s philosophy of “learning through the soles of your feet” with excursions across Ireland throughout the semester.

“Notre Dame took us on a lot of field trips all over the island. I had a chance to see places I wouldn’t have without the backing of an established program in Dublin,” Giglia said. “It was really useful. I saw so much more in that semester than I would have even if I had been living here for a couple of years on my own.”

“Notre Dame took us on a lot of field trips all over the island ... I saw so much more in that semester than I would have even if I had been living here for a couple of years on my own.”

Since then, Giglia has returned to Ireland for graduate school and the beginning of her career in academia. She continues to draw on her undergraduate study of the language and culture as she makes a life for herself in Ireland.

For instance, her four years studying the language help her connect with Irish friends and colleagues, who are required to study it through primary and secondary school.

“Taking Irish is such a universal experience for Irish people,” Giglia said. “So, it’s one more way to relate to people, because we have that shared experience of knowing a bit of Irish.”

And, she added, her knowledge of the language helps her correctly pronounce traditional Irish names, which often comes as a delightful surprise to her friends and coworkers.

“It’s a small thing, but being able to connect that way is useful,” she said.

As Giglia continues her career in Ireland, she says it’s the people there, including friends she made through her summer language and master’s programs, who keep her coming back.

“That was definitely a big part of why I wanted to return after completing my master’s,” she said. “I met a really great group of people living here and really liked the life that I could have in Dublin.”

That includes the Notre Dame community in Ireland, both through the Notre Dame Club of Ireland and the Dublin Global Gateway — where she currently lives in an apartment at O’Connell House in Dublin city centre.

“It’s really nice to know that there’s such a big group of people who have this Notre Dame connection around Dublin,” she said. “It’s a built-in community.”