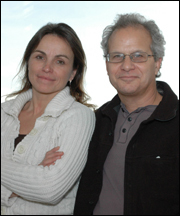 The typical visiting fellow at Notre Dame’s Kellogg Institute for International Studies is a scholar, says interim director Edward N. Beatty. But now and again, someone outside the academy can make an unmatchable contribution.

This semester, visiting fellows Gary Marx, former Havana bureau chief for the Chicago Tribune, and his wife—freelance journalist Cecilia Vaisman—are teaching a course on contemporary Cuba. The couple and their children, 11-year-old Ana and 9-year-old Andres, recently returned to the U.S. after living in Cuba for five years.

The couple brings something special to campus, Beatty says.

“Their on-the-ground experience, reporting the nitty-gritty of political and social change, combined with their willingness to lay their experience out on the table with students,” he said. “The students feel very free to ask questions.”

The most common question Marx was asked, before Cuban President Fidel Castro publicly turned over leadership? Whether Castro was alive or dead?

His answer? “He’s alive. It’s not something they could hide for long.”

People also are wondering what will happen as Castro steps down from leadership, ceding power to his brother and handpicked successor Raul Castro.

The real question, Marx says, is what will happen when Raul Castro steps down or dies.

“We spent a lot of time going down to the beach with our kids,” she said.

Their children attended a local Cuban school, and the family shopped alongside Cubans in the agro-markets, where farmers sell fresh fruit—mangoes and papayas—and vegetables.

But students who see pictures of their life in Cuba are astonished at the level of poverty on the island.

Vaisman spent most of her time engaged in “what the Cubans call resolviendo and conseguindo—resolving and finding,” she said. “Those are no simple matters in Cuba.”

Finding something as simple as children’s ibuprofen or a lamb for Christmas dinner could take days.

They lived under the constant pressure of a police state.

Early on, Marx profiled a well-known dissident in the Tribune—only to find out a few weeks later that he was a government agent.

“You can’t take anybody at face value,” he said.

Their five-year stay on the island ended abruptly.

“They called me in and said they were not going to renew my press credentials—they felt my coverage was negative,” Marx said. “They didn’t want to engage in debate. My time was up. I could no longer report from the island.”

During their fellowship, Marx and Vaisman are working on a book on their years in Cuba, weaving in the history of Cuba and current political events with their own experiences. Vaisman also is working on a documentary film.

“It was an incredibly difficult place to work,” Marx said. “But for a journalist, it was the ultimate challenge. I’m grateful I had the chance to live and work there.”

The Kellogg Institute also is grateful for the opportunity to bring the couple’s experience and expertise to campus, says Beatty.

“It’s an example of the way Kellogg enriches the entire University community,” he said. “It helps make our little world more interesting.”

Originally published by Carol C. Bradley at newsinfo.nd.edu on March 14, 2008.