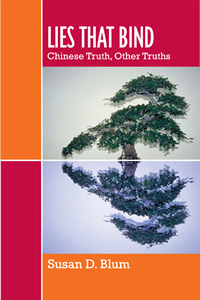 Susan D. Blum, associate professor of anthropology and director of the Center for Asian Studies at the University of Notre Dame, is the author of a new book titled “Lies that Bind: Chinese Truth, Other Truths,” which explores the ideology of truth and deception in China and elsewhere.

Offering a nuanced perspective on social interaction in different cultural settings, Blum draws on decades of fieldwork in China, providing an authoritative examination of society’s rules, expectations and beliefs regarding lying and honesty.

Published by Rowman & Littlefield, “Lies that Bind” points to a propensity for deception in Chinese public interactions in situations where people in the United States would expect truthfulness, yet Blum argues that lying is evaluated within Chinese society by moral standards different from those of Americans. Chinese, for example, might emphasize the consequences of speech, Americans the absolute truthfulness, according to the book.

Blum considers the longstanding values that led to this style of interaction, as well as more recent factors, such as the government’s control over expression, and observes that many Americans also excel in manipulation of language, yet find a simultaneous moral absolutism opposed to lying in any form. She also considers other traditions, including Japanese and Jewish, that struggle to control the boundaries of lying, balancing human needs with moral values in contrasting ways.

Deception and lying, the book concludes, are distinctively cultural, yetuniversally inseparable from what it is to be a human being equipped with language in all its subtlety.

Blum also is the author of “Portraits of `Primitives’: Ordering Human Kinds in the Chinese Nation” and co-editor of “China Off Center: Mapping the Margins of the Middle Kingdom.” She currently is completing two forthcoming books titled “College Plagiarism: A Cultural Guide” and “Making Sense of Language: Readings in Linguistic Anthropology.” She is an expert on Chinese identity and nationalism, anthropological theory, linguistic and cultural anthropology, food and culture, the self and the body, ethnicity and language, the anthropology of morality, and higher education.

A member of the Notre Dame faculty since 2000, Blum was graduated from Stanford University. She earned master’s degrees in anthropology and Chinese language and literature and her doctoral degree in anthropology from the University of Michigan.